Bookmarks: Dartmouth Authors Talk About What They Learn From Their Own Books

Currently on display in the café on the first floor of Baker-Berry Library are nine books written by Dartmouth authors on topics ranging from psychoanalysis to mathematical theory to poverty. Dartmouth Now shares insights from three of the writers as well as a listing of the six other featured authors. 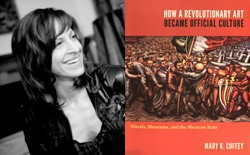 How a Revolutionary Art Became Official Culture: Murals, Museums, and the Mexican State

Impetus: The inspiration for my book was trying to find a concrete way to assess the political effects of public art. Mural art is hailed as a popular and leftist art. It is also viewed, in Mexico, as a kind of state propaganda. I wanted to figure out how to reconcile these seemingly incompatible views, while also crafting a way for other scholars to study politics in art through taking institutionalization seriously. That is, forging an approach to studying art that considers how it is situated and affected by its location within cultural institutions, and particularly, the museum.

Lessons learned: I learned a lot about how Mexican art changed during the Cold War period and how artists tried to cope with an international art world that was moving away from politically engaged art and toward a “universalizing” discourse. I knew this story as it pertained to the development of the American art world after WWII, but figuring out how this played out in Mexico during the same period was the real discovery of my project and the real contribution of my book, I hope. 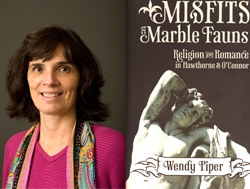 Misfits and Marble Fauns: Religion and Romance in Hawthorne and O’Connor

Wendy Piper, lecturer in writing at the Institute for Writing and Rhetoric

Inspiration: Well, as a scholar of American literature and American studies, I’d been interested in Flannery O’Connor’s and Nathaniel Hawthorne’s fiction for a long time. I particularly liked the philosophical and religious dimensions to their fiction. I felt that they addressed key issues in modern cultural life. The predominant critical approach to O’Connor’s fiction, though, has always been theological, and I wanted to take a fresh approach that would perhaps make her fiction accessible to non-religious readers and students. I also wanted to take the philosophical approach that I have in order to get right to the ethical dimension of their work. Philosophical hermeneutics, developed by Hans-Georg Gadamer, offers a very trenchant critique of the scientism that O’Connor and Hawthorne both represent and satirize, and it does so in a more universal way, I think, than the dominant religious and cultural approaches to their fiction do.

New Discoveries: Well, the writing process always opens you up to new discoveries. That, and teaching, of course. I was always surprised by the new connections that were being made between O’Connor and Hawthorne as writers through my writing of the book , and in discussions with students. I’m always having to go back and re-evaluate my own assumptions and then take them deeper, or a new angle develops through writing. 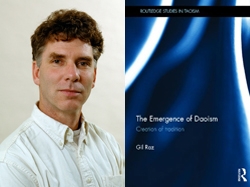 The Emergence of Daoism: Creation of Tradition

Considerations: I have always been curious about how religions start. How do people create their traditions? What do they keep from the past? What is new? How do they decide to establish a different community of practice from their neighbors, friends, and even family members? It was especially fascinating to try and answer these questions while exploring the appearance of Daoism in medieval China.

Lessons learned: One of the most important lessons I learned was how little we really know about the motivations and aspirations of people. On the other hand, I also learned how much we could know about people remote in time and place if we read very carefully and really try to penetrate into their mental universe to see the world as they do.

Berlin Psychoanalytic: Psychoanalysis and Culture in Weimar Republic Germany and Beyond

Robert B. Santulli, associate professor of psychiatry at the Geisel School of Medicine

Misplaced Objects: Migrating Collections and Recollections in Europe and the Americas