Dartmouth Mobile Research Lab on the Green this Summer

There’s a new addition to the fleet of vendors at the farmer’s market on the Green— but its fare doesn’t involve local fruits or vegetables. Instead, the PLAYCUBE, a mobile laboratory doing research on the role games play in social change, is offering food for thought. 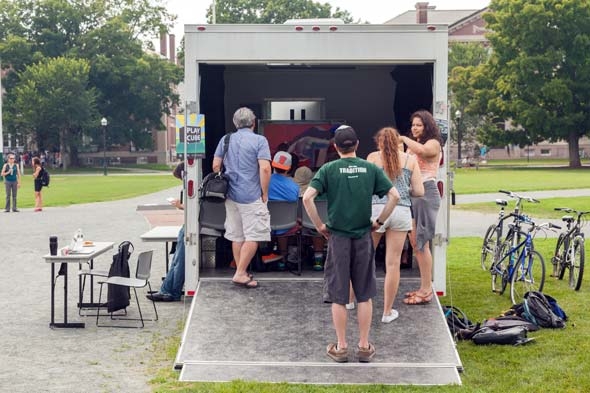 Every Wednesday through August 1, the PLAYCUBE serves as an experimental exhibition venue, and will also host a smaller version of Professor Mary Flanagan’s Tiltfactor Laboratory. The PLAYCUBE will also be at HOPFest, the July 20-21 celebration of the 50th anniversary of the Hopkins Center for the Arts.

Flanagan, the Sherman Fairchild Distinguished Professor in Digital Humanities, received a National Science Foundation grant in February to support her research of gender bias in the areas of science, technology, engineering, and math—also known as the STEM disciplines.

Tiltfactor creates and researches games related to technology and human values. The PLAYCUBE serves as a venue for Tiltfactor to conduct research, and expose a broad audience to the role games play in social change.

One of the lab’s recent games, Buffalo, combats gender bias and stereotyping in the STEM fields. Max Seidman ’12, who works in Tiltfactor, said early testing in middle schools suggests Buffalo, a word association card game that has players try to name accomplished people in various categories, is effective in helping students spot and confront their biases. 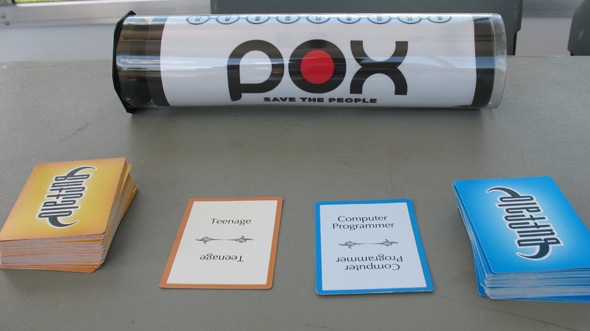 Tiltfactor creates and researches games that relate to technology and human values. (photo by Keith Chapman)

Seidman said the PLAYCUBE’s mobility makes Tiltfactor’s research accessible to a wide audience. Putting the PLAYCUBE in unusual settings “gets people out of their typical way of thinking,” he says.

Knowing how games influence social change is important, he added, and Tiltfactor is leading the way in understanding this connection. The PLAYCUBE was built with funding from co-sponsors the Neukom Institute and the Leslie Center for the Humanities.

“Few other universities have programs like this,” he says. “This lab puts Dartmouth at the forefront of media studies.”

While the PLAYCUBE showcases Tiltfactor this summer, Flanagan says it’s a useful tool across disciplines.