Professors Kristina Lynch and Ekaterina (Kate) Pletneva practice very different kinds of science at Dartmouth, but they share a deep commitment to engaging students—undergraduates in particular—in the research experience.

Lynch is a plasma physicist who studies the Aurora Borealis—the Northern Lights that color the night skies in the high latitudes. Her students study the environment above the atmosphere, where the light itself is made, where the particles, currents, and forces are set in motion, giving rise to an often spectacular lightshow. And, they fly NASA-sponsored sounding rockets (non-orbiting spacecraft) into those regions.

“By their senior year my undergraduates are involved with the plasma physics aspects, but they first begin by working with the electronics and the mechanical design of our study instrumentation,” says Lynch, a professor of physics and astronomy.

Pletneva also conducts basic scientific research but her focus is much closer to the ground, on things far smaller and far less visible than Lynch’s heavenly phenomena. Protein biochemistry is Pletneva’s province, investigating protein conformations—the shapes into which they contort as proteins unfold and interact with other molecules, performing different functions.

Addressing a paper recently published in the Proceedings of the National Academy of Sciences (PNAS), Pletneva explains that her team used optical spectroscopy to visualize changes in a protein. “Attaching fluorescent tags to the protein allowed us to see how it unfolds, looking from different angles, seeing how the distances between two points in the protein change,” says Pletneva, an assistant professor of chemistry. “What was important in the paper, beyond the measurements of structure, is connecting what we learned from structure to the protein’s function.”

The paper’s first five authors listed are all students, four being undergraduates. “You find a sense of urgency, especially among undergraduates, and a sense of excitement,” Pletneva says. “I like working with undergraduates in part because of their openness to any type of experiment that they do. They have their own individual projects and I think this also helps, being personally responsible for their piece of the story.”

Jason Toffey ’12, a biophysical chemistry major, is one of the undergraduate PNAS authors. “My time in the lab as an undergraduate was nothing short of extraordinary. Although research on the project consisted of long hours at times, and seemed frustrating when things did not go as planned, the excitement that came with data collection, analysis, and conclusions was so overpowering that it was worth it,” Toffey says.

Toffey and two of his student co-authors, AJ Vincelli and Jonas Hanske, discuss their research laboratory experience in video interviews. 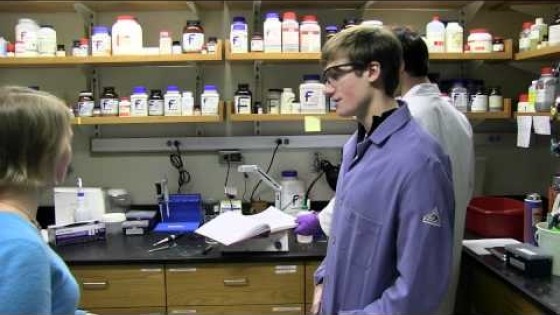 The Lynch Rocket Lab, as might be expected, contrasts with Pletneva’s more traditional laboratory. For the most part, Lynch’s students can be found outdoors, directing their attention upward. Much of their work centers on the GreenCube Project, a small spacecraft design and launch undertaking sponsored by the NASA Jet Propulsion Laboratory.

“GreenCube is an undergraduate-driven, undergraduate-motivated ongoing science and engineering project that was started by Rocket Lab undergrads about 6 years ago,” Lynch explains. “They wanted a project over which they had more direction, rather than just working on support tasks in the Rocket Lab. It’s a seed project for technologies I hope to take up to orbital spacecraft projects.”

GreenCube is derived from the CubeSat developed at California Polytechnic University and Stanford University, a type of miniaturized satellite for space research carrying electronics and scientific monitoring instruments. The CubeSat package is actually the shape of a cube, with a volume of about one liter. The Dartmouth GreenCube uses a casing triple in size, allowing a larger payload. It can be flown to 90,000–110,000 feet—more than three times the altitude of commercial aviation—via sounding balloon, and is currently being modified to be launched into space on a sounding rocket.

A cold April morning found members of the Lynch Rocket Lab at the Mt. Washington Regional Airport near Whitefield, N.H. They were preparing to conduct test balloon launches of the GreenCube and another vehicle known as ALTAIR—Airborne Laser for Telescopic Atmospheric Interference Reduction—a project being built for Harvard’s dark energy research.

“Both of the flights are just engineering,” says Max Fagin, design fellow at Dartmouth’s Thayer School of Engineering and a Thayer Class of 2011 graduate. “There is no science being done on these yet. This is to test the instruments and demonstrate that the ALTAIR vehicle really works.”

Fagin explained that ALTAIR is a test of a new approach for calibrating atmospheric effects on observation through ground-based, large telescopes. “The balloon projects are all undergraduates and the graduate students work on rockets. There is kind of a pipeline feeding the payloads and the work that we do on balloons into the rockets because you want to fly something on a balloon before you fly it on a rocket.”

While the GreenCube launch was scrubbed due to radio problems, ALTAIR’s was successful and the morning’s events are chronicled in the slideshow on Dartmouth’s flickr site.