His July 5 presentation was part of the “Leading Voices in U.S. Foreign Policy” lecture series that supplements a government course, taught by Professor Benjamin Valentino. Kristof met with the class, “America and the World: Contemporary Issues in U.S. Foreign Policy,” earlier in the day, and was impressed with their discussion.

“They asked such great questions,” Kristof said, “I suggested to Ben [Valentino] to give everyone an A.” 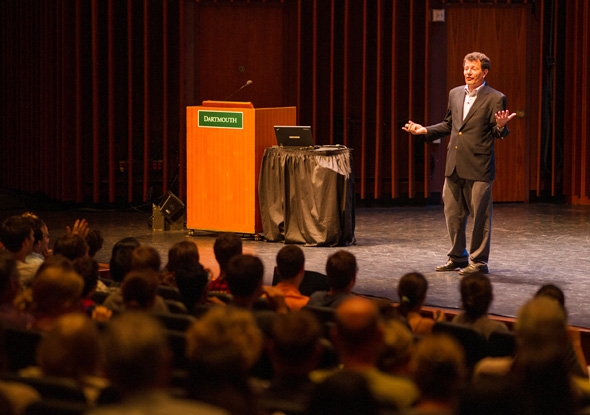 New York Times journalist Nicholas Kristof says education is the best way to improve the condition of women around the world. Kristof spoke at Dartmouth as part of the “Leading Voices In U.S. Foreign Policy” lecture series. (photo by Jacob Kupferman ’14)

Kristof, a Pulitzer-prize winning writer, is the author of Half the Sky: Turning Oppression into Opportunity For Women Worldwide, a book he wrote with his wife and fellow journalist, Sheryl WuDunn. Kristof spoke about his experiences reporting on gender injustices both at home and abroad. He said domestic abuse and sex trafficking are two major issues in the U.S., and both foreign and American women are victimized.

“There is a misperception that sex trafficking is about foreign women smuggled into the U.S.,” Kristof said, “That is, indeed, one part of the problem, but an awful lot of it is about American homegrown girls.”

Kristof told several anecdotes about human rights violations he’d witnessed in Cambodia, China, and Afghanistan. He’s known for reporting from volatile regions, telling personal stories of abuse and oppression in his columns. He holds no misperceptions about the difficulty of improving human rights.

“Helping people is harder than it looks,” he said, “There are a lot of projects that just fail.”

Still, Kristof has seen tremendous strides in the fight against poverty and for education in his 25 years of reporting. Education is especially important for women, he said, because it allows them to bring valuable assets to society. Places that invest in women’s education are transformed in positive ways.

“When you do invest in girls’ education,” Kristof said, “you bring educated women into the work force, and you see benefits for the entire community.”

Kristof believes global gender inequality is the greatest moral challenge of the 21st century. For Americans, who “won the lottery of life,” he thinks there is an ethical obligation to help the less privileged. He asked students to give back while they pursue their degrees and careers, saying even small charitable works can serve as a source of great fulfillment.

Julia Herringer ’14, a student in Valentino’s class, said she found Kristof’s message powerful because it seemed tangible to her.

“[Kristof] implored us to choose one thing we cared about and find a way to make a modest, but measurable difference in the lives of others,” she said. “He advised us [students] to use what we already have to incite change.”

While Kristof thinks that both males and females have contributed to the current state of gender inequality, he concluded the talk by saying everyone has to be engaged to improve women’s rights.

“If the only people who care about women’s rights are women, that issue is lost already,” he said. “When people, as a whole, care about human rights abuses, then we can look back and start to see a change.”

See the Office of the President for information and the Leading Voices lecture schedule.

Description
Government professor Sean Westwood’s work with the Polarization Research Lab is cited in a column on last week’s elections. Westwood says “that democratic norm violations of the sort many Republicans ran on are an electoral loser.”
The New York Times