Retired Navy Admiral is Next Speaker in ‘Leading Voices’ Series

Decorated Naval veteran Admiral William Fallon will speak July 19 at Dartmouth as part of the “Leading Voices in U.S. Foreign Policy” lecture series. The talk, free and open to the public, will begin in the Hopkins Center’s Moore Theater at 4 p.m. 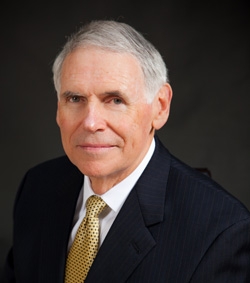 Admiral William Fallon has served in several leadership positions, including as head of U.S. Central Command, during his 40-year Naval career. (photo courtesy of William Fallon)

The series supplements a government class for sophomores, who spend the summer term at Dartmouth. The course, “America and the World: Contemporary Issues in U.S. Foreign Policy,” is taught by Benjamin Valentino, associate professor of government. Each week, a different faculty member will lead the class, giving an introductory lecture to prepare students for the address by the visiting presenter, who will speak to the class and the public later in the week.

“Admiral Fallon has led one of most distinguished careers in the U.S. military in recent years,” said Valentino. “This is a great opportunity for students to ask questions about key U.S. foreign policy issues like the war in Afghanistan, America’s dependence on Middle Eastern oil, or the possibility of a war with Iran.”

Fallon began his career as a pilot in the Vietnam War. He led a carrier air wing during the Gulf War, and commanded a Navy battle group during NATO military operations in Bosnia. He was a Robert E. Wilhelm Fellow at the Massachusetts Institute of Technology, Center for International Studies and chairs the Center’s Advisory Board. He also serves on advisory boards at Occidental College and the University of California, San Diego.