A wall sculpture by renowned abstract artist Ellsworth Kelly will be installed on the façade of the Hopkins Center for the Arts, facing the new Black Family Visual Arts Center. Installation of the new work will begin Monday, July 9. 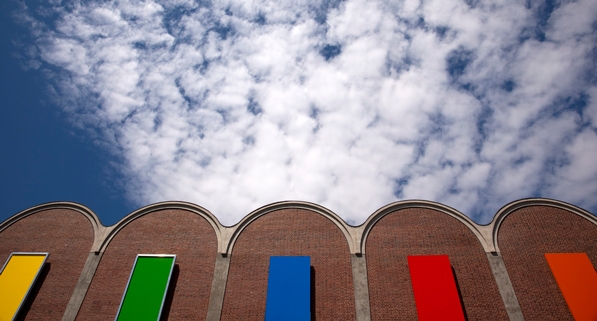 A view of the wall sculpture by Ellsworth Kelly installed onto the east wall of the Hopkins Center. (photo by Martin Grant)

This major work, titled Dartmouth Panels, was commissioned by longtime arts patrons Leon Black ’73 and his wife Debra Black, who contributed $48 million toward creation of the center. Leon Black served as a Dartmouth trustee from 2002 to 2011.

A special dedication ceremony for the center, where construction is continuing, will include a formal unveiling of Dartmouth Panels and will be held September 14, 2012.

“We are grateful to Leon and Debra Black for their continued generosity and for commissioning this new work of public art by Ellsworth Kelly, one of America’s most iconic abstract artists. The work will enliven our Arts District,” said Dartmouth President Carol Folt.

Michael Taylor, chair of the Public Art Committee and director of the Hood Museum of the Art at Dartmouth, said Kelly’s work “reflects Dartmouth’s dedication to interweaving the arts in the everyday experience on campus, and is part of a larger initiative of leveraging the arts to stimulate new connections on campus. We look forward to bringing other public artwork to Dartmouth in the coming year.”

Born in 1923, Ellsworth Kelly is widely recognized as one of the greatest abstract artists working today. He is known for his use of scale, simplicity of form, and vibrant, pure colors. The Dartmouth Panels reflects Kelly’s abiding interest in abstract shapes and how they intersect with their environment. In both past and present, Kelly has frequently drawn inspiration from his experience of the visual world, such as the shadow of a leaf or the silhouette of bed sheets, blowing on a clothesline. Kelly takes these forms and refines and abstracts them until they become about pure shape.

Simple rectangular forms, such as those in the Dartmouth Panels, are also part of his repertoire, and the experience of a work of art like the new Dartmouth sculpture becomes about how the art is perceived in relation to the built environment. The Dartmouth work is composed of five monochromatic aluminum panels, each painted a single block of color—yellow, green, blue, red, and orange. The hard-edged shapes of Dartmouth Panels play off the rounded roofline of the Hopkins Center’s Spaulding Auditorium and echo the color spectrum and basic building blocks of visual experience.

Major wall sculptures by Kelly are in the collections of many institutions, including The Art Institute of Chicago, U.S. Embassy in Beijing, The Pulitzer Foundation of the Arts in St. Louis, The Museum of Modern Art in New York City, and the Grand Rapids Art Museum. In April, a major free-standing sculpture by the artist was installed on the site of the new Barnes Museum campus in Philadelphia.

The Hood Museum of Art collection has an early important painting by Kelly, Green-White (1961), which graced the cover of the Hood’s recent catalog of modern and contemporary holdings. The painting is currently on view at the entrance to the Hood’s galleries. The museum also owns six other works by Kelly, and presented solo exhibitions of his prints in 1990, and his plant lithographs in 2005.

The installation of Kelly’s new work is one of the many events in Dartmouth’s Year of the Arts—a series of special programs and initiatives to be held during the 2012-2013 academic year that will highlight the school’s vibrant arts culture and reaffirm its role as one of the nation’s leading academic arts communities. The dedication of the Visual Arts Center and the unveiling of Dartmouth Panels will be part of the official launch of Year of the Arts and inauguration of Dartmouth’s Arts District.