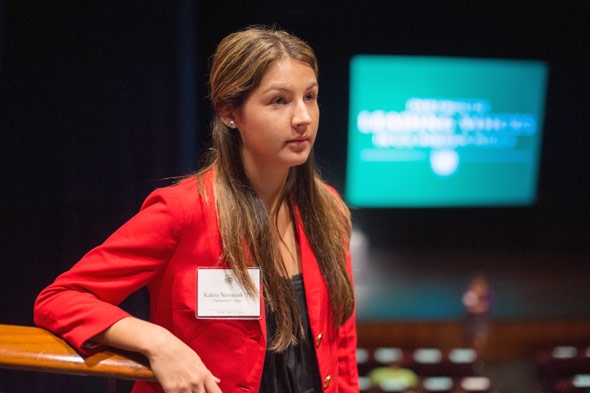 Kalina Newmark ’11, a presidential fellow, is helping to coordinate this year’s 40th anniversary of the Native American Program at Dartmouth. (photo by Eli Burak ’00)

On the Job: She’s more than 4,000 miles from her home in Tuktoyaktuk, Northwest Territories, but Presidential Fellow Kalina Newmark ’11, who grew up in a traditional Native American community, has always felt welcome at Dartmouth.

“Growing up traditionally fishing, hunting, and hearing stories from my elders,” Newmark says, “it was very important to me to be around other Native students and feel supported by the Dartmouth community.”

Newmark is an enrolled member of the Tulita Dene Band, a Canadian tribe of the Northwest Territories. Newmark fondly remembers ocean swimming and building fires at the beaches near Tuktoyaktuk, a town of about 900, in the 24-hour daylight of the Arctic summers. The village is so remote that there is only an ice road connecting it to the outside world. In warmer weather that road is impassable, and Tuktoyaktuk can be reached only by air.

“The Native American community has been an integral part of my Dartmouth experience,” she says, “so I was happy to still be involved as a staff member.”

As the program’s coordinator, Newmark has helped plan upcoming anniversary events that include a performance by Native comedian Don Burnstick, a conference on Native American historical trauma, and a men’s wellness program instructed by First Nations educator, Duane Jackson. The wellness program addresses relevant issues that Native men face on reservations and in their communities.

On campus: Newmark admits she was nervous about making the change from Dartmouth student to staff member, but she now embraces her different role, both generally and within the Native American community on campus.

“I was a little worried about the transition,” she says, “But over time I have seen the benefits of being in an administrative position and the opportunities that it has afforded in being an advocate for the Native American community.”

Newmark says she feels a stronger appreciation for Dartmouth staff, and believes that as an employee, she can have a larger impact in raising issues for Native Americans. As both student and staff member, Newmark has always valued the collegial atmosphere at Dartmouth.

At home: Outside of work, Newmark, who double majored in Native American studies and anthropology modified with linguistics, enjoys photography, writing poetry, and playing basketball and soccer. Additionally, she maintains her academic interests. During her junior year, Newmark and her research partner, Nacole Walker ’11, presented their project, “Ethnic Construction on the borderlands: An Experiment and Analysis of ‘Native American-Accented English’ Dialect Features," to a sociolinguist conference in San Antonio, Texas. Newmark continues to work on this research, hoping to publish their findings.