U.S. Special Envoy for Climate Change Todd Stern ’73 will speak August 2 as part of the Leading Voices in U.S. Foreign Policy lecture series. The talk, free and open to the public, will begin in the Hopkins Center’s Moore Theater at 4 p.m.
Image 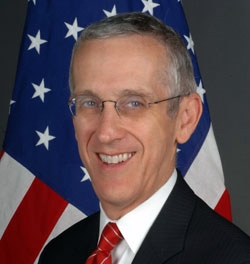 Todd Stern ’73 has served in a variety of governmental positions, including as the senior White House negotiator at the Kyoto and Buenos Aires climate conferences. (photo courtesy of Todd Stern)

The Leading Voices series is in its third season. In the first series, “Leading Voices in Politics and Policy,” brought national political figures and policymakers to campus last summer. “Leading Voices in Higher Education,” part of Dartmouth’s strategic planning process, has featured visits from prominent writers, figures, and thinkers within higher education.

Stern is one of six speakers in the current series, which includes a global health leader, Pulitzer-prize winning journalist, distinguished Navy Admiral, former Defense Department official, and a noted economist.

The series supplements a government class for sophomores, who spend the summer term on campus. The course, “America and the World: Contemporary Issues in U.S. Foreign Policy,” is taught by Benjamin Valentino, associate professor of government. Each week, a different faculty member leads the class, giving an introductory lecture to prepare students for the address by the visiting presenter, who speaks to the class and the public later in the week.

“Todd Stern has been at the center of several of the most important international negotiations on climate change in the last two decades,” says Valentino, “This is a terrific opportunity for our students to learn about how states work together—and why they sometimes fail to work together—to solve the environmental problems that affect us all.”

Working for the State Department, Stern is the president’s chief climate negotiator, representing the U.S. internationally at the ministerial level in negotiations regarding climate change. He also helps shape the development of domestic climate and clean energy policy.

Prior to joining the Obama administration, Stern was a senior fellow at the Center for American Progress and a partner at the law firm WilmerHale. He has served in several governmental positions, working in the White House from 1993-1999. As staff secretary in the White House, Stern played a central role in preparing the key issues of domestic, economic, and national security policy for the president; he also acted as senior White House negotiator at the Kyoto and Buenos Aires climate conferences.

Additionally, Stern has worked as senior counsel to Senator Patrick Leahy (D-Vt.), as an adjunct lecturer at Harvard’s Kennedy School of Government and as a fellow at the German Marshall Fund of the United States. He is a member of the Council on Foreign Relations.