Welcome to the State of Virginia 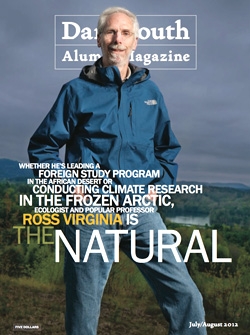 Only at the end of Ross Virginia’s class, “Pole to Pole: Environmental Issues of the Earth’s Cold Regions,” do students get to eyeball his so-called “hero shot.”

By this time they’ve mastered the difference between global warming and climate change and immersed themselves in College-owned artifacts from polar explorations. They’ve seen pictures of Virginia’s own classroom, if you will: the vast, frozen deserts of the “pork chop-shaped” Antarctica, where Virginia has studied soil and critters for two decades as part of a research team dubbed The Wormherders. They’ve heard him compare the continent to Mars. Heck, they’ve even handled samples of its soft gray dirt. Finally, the photo appears: His cloud-white beard shining in the December sun, bright-red parka and white moon boots popping against a backdrop of blue, Virginia smiles big from his footing in Virginia Valley.

As in the upland terrain at the 77th southern parallel that the U.S. Board on Geographic Names put on the books in Virginia’s honor in 2004.