This month marks the 75th anniversary of the completion of the Appalachian Trail (AT), a national hiking path frequented by Dartmouth students and community members—although many of them may not even realize it. 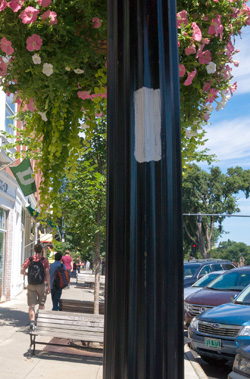 A white blaze on a lamppost marks the path of the Appalachian Trail on Main Street in Hanover. (photo by Eli Burak ’00)

“Students and faculty and staff walk a block or two of the AT every time they stroll downtown for a meal or quick errand,” says David Kotz ’86, the Champion International Professor in the Computer Science Department and associate dean for the sciences.

The trail runs west to east through Hanover: entering over Ledyard Bridge, it travels east on Wheelock Street, south on Main Street to Lebanon Street, and then east past Blackman Fields toward Etna.

The Appalachian Trail was completed on August 14, 1937, more than 15 years after construction began. It stretches across 14 states and approximately 2,180 miles, from Springer Mountain, Ga., to Katahdin, Maine. Every year, 2 to 3 million hikers visit the AT and about 2,000 complete the entire trek, according to the Appalachian Trail Conservancy (ATC).

Dartmouth is the only college on the AT. Many Norwich and Hanover residents serve as “trail angels,” hosting hikers in their homes overnight, while some local restaurants give them free food. A northbound hiker from Massachusetts named Matt passed through July 26 and experienced some “trail magic” when a Hanover resident gave him a ride into town.

“It is definitely a good place to recharge and get excited for the White Mountains,” Matt said through a thick beard. 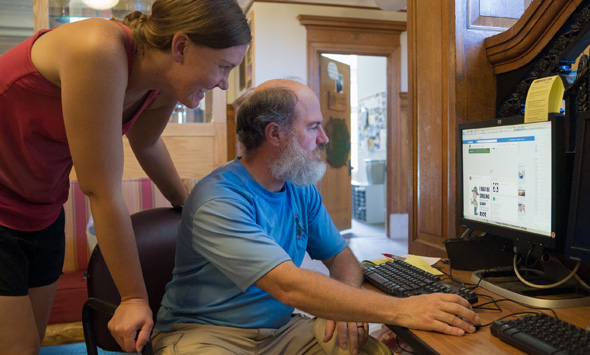 Two thru-hikers enjoy a break from the trail, checking their email on a computer in Robinson Hall. (photo by Eli Burak ’00)

For northbounders, who are the vast majority, Hanover is the entrance to New Hampshire and the last town they’ll visit before completing the journey. John Rex of Columbus, Ohio, arrived on July 30 and said the town is a landmark on the trail.

“I’ve been looking forward to Hanover for a long time,” he said. “It is the best town so far.“

Serendipity on the AT

The first time I heard about the Appalachian Trail was during my DOC first-year trip in 1996. After a day of hard hiking, my fellow “Trippees” and I were getting settled in the Hexacube shelter, just below the summit of Mount Cube. Two heavily bearded guys walked into the campsite and, as they prepared camp, regaled us with stories about thru-hiking from Georgia, following the AT for over 1,700 miles up to that point. Their trail names were “Weathervane” and “Flossy.”

The next day, I decided to hike up with a group to the top of Mount Moosilauke. As soon as we summited, we looked to our left and, lo and behold, Weathervane and Flossy were hiking the AT from the south. We chatted again. As they continued north, I thought to myself, someday I’ll try to follow in their footsteps.

Three years later, the dream seemed like it was going to be a reality. I was using the spring and summer terms of my junior year to hike the AT. In late April of 1999, I was in southern Virginia, about 400 miles into my hike. I noticed a side trail to the summit of Mount Rogers, the highest point in Virginia. Not wanting to miss this opportunity to bag a highpoint, I dropped my pack and hiked the one-mile trail to the treeless summit.

When I arrived at the peak, the fog was dense and the air was still. On a rock in the middle of the clearing, a clean-shaved man in his late 20s was sitting motionless and silent. He looked up, his eyes revealing a sadness, and we exchanged greetings. I sat down and asked him what he was doing there.

“Well, a few years ago I hiked the AT,” he said. “I’m now finishing up a few sections that I missed. At the moment, however, I’m thinking about my hike and how it gave me purpose.”

“I feel so useless now and I’m just wishing that, in some way, I had been able to affect somebody’s life in a truly positive way.”

I asked him what his trail name was.

My jaw dropped. I told him that he’d been the first thru-hiker I had met and that it was meeting him that had put the idea of hiking the trail in my head. That interest burned in me, and three years later, there I was, attempting my own thru-hike.

I would not have been there without him.

The AT is maintained by the National Park Service, the U.S. Forest Service, and 31 volunteer groups, including the Dartmouth Outing Club (DOC). DOC members oversee a rugged 53-mile stretch of trail from Hanover to Mount Moosilauke, the 4,802-foot summit at the southern end of the White Mountains. They also perform upkeep on several Dartmouth-owned cabins along this section. The DOC is one of only two collegiate clubs that help maintain the trail.

Gerben Scherpbier ’14, president of the DOC, enjoys meeting AT hikers who travel through Dartmouth. They tend to be a diverse crowd, with wide-ranging motivations for embarking on the trek.

“I think having the AT run straight through campus is an incredible feature that brings a very different type of visitor to Dartmouth on a daily basis during the summer,” says Scherpbier.

Hikers can also camp in Hanover—there are shelters at Velvet Rocks and Storrs Pond—or lodge at nearby hotels.  At Bagel Basement, where hikers can get a free bagel and cream cheese, employee Meredith McDonald estimated that four hikers come through a day, and seem thrilled just to sit down and eat a meal at a table.

“I always try to strike up conversations with them,” says McDonald. “They are always really kind and grateful.”

The ATC will celebrate the August 11-12 anniversary weekend with festivities at its headquarters in Harpers Ferry, W.Va. A book to be released in September, The Appalachian Trail: Celebrating America’s Hiking Trail, will also commemorate the occasion. The book includes a foreword by a former Hanover resident, author Bill Bryson, who gave a witty account of his misadventures hiking the AT in his book, A Walk in the Woods.

On August 11, the DOC, the Hanover Area Friends of the AT, and the Town of Hanover will host several guided AT hikes and a gathering in front of Robinson Hall.

Starting August 22, the DOC will begin leading its first-year trips, many traveling over the Dartmouth-maintained section of the AT. Led by upperclassmen, these trips help incoming students get acquainted while giving them a chance to explore the surrounding natural environment.

“For many students, their first days at Dartmouth are spent hiking along the Appalachian Trail,” Kotz says. “From their first moment of bonding with classmates, they bond with Dartmouth and New Hampshire via the trail.”