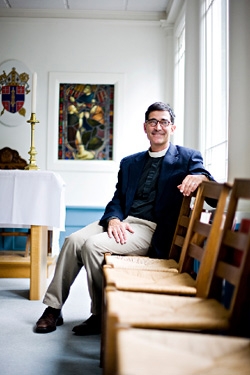 On August 4, A. Robert Hirschfeld ’83 was ordained as the bishop of the Episcopal Diocese of New Hampshire. (photo by John Tully/Concord Monitor)

A devastating football accident when he was 13 led A. Robert Hirschfeld ’83 to abandon his faith and the church. A decade later, he was a student at Dartmouth,  sculling on the river on a cold November day, when he had a feeling of being “visited,” Hirschfeld tells the Concord Monitor.

“I can’t really describe it, except the feelings that accrued were of being surrounded and filled and buoyed up and embraced by some presence that wasn’t me. And also hearing without words,” Hirschfeld says.

Thus began his path back to the church and to divinity school, the priesthood, and his ordination August 4 as the bishop of the Episcopal Diocese of New Hampshire.

Read the full story, published 8/4/12 in the Concord Monitor.

Hirschfeld was also featured in The Boston Globe via the Associated Press.