Since their discovery in the 1960s, black holes have been the substance of science and the focus of fantasy. A black hole appears on the cover of the August 3 issue of Science magazine, a top scientific journal, which devotes a special section in this issue to these mysterious objects.

In the week preceding publication, more than 60 astrophysicists from around the world gathered in Hanover, N.H., for five days of discussion and presentation of new results in a conference billed as “Black Hole Feedback 2012.” Organized by Dartmouth’s Ryan Hickox and his collaborators at Durham University in the United Kingdom, the meetings were sponsored by Dartmouth’s Office of the Provost. 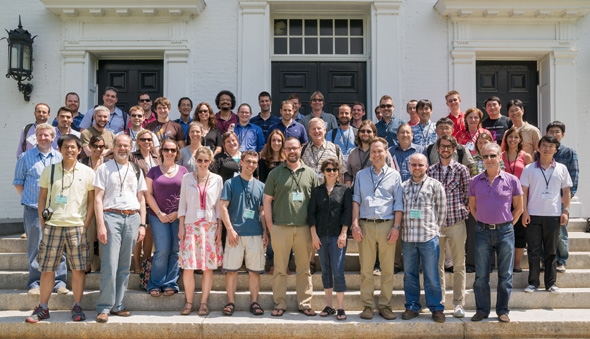 Conference attendees included about 60 young astrophysicists who are conducting the most crucial research at the vanguard of black hole studies. At least half the participants came from outside the United States. (photo by Eli Burak ’00)

“I am delighted Dartmouth hosted a meeting of scientists working on black hole-galaxy interactions,” says Dartmouth Interim Provost Martin Wybourne. “Ryan Hickox and his colleagues from Durham University are to be congratulated on bringing together experts from around the world to examine recent developments and frame future questions that advance this aspect of astrophysics. I look forward to Dartmouth continuing to build these international partnerships.”

The meetings fell under the aegis of the Matariki Network, an international group of universities that includes Dartmouth and Durham, with the collective mission of fostering research, scholarship, and education.

“The focus of the conference was entirely on active galactic nuclei, the supermassive black holes that sit at the center of galaxies,” says Hickox, an assistant professor in the Department of Physics and Astronomy. “These powerful objects are drawing in material and then releasing or feeding back vast amounts of energy, hence the title of our conference.”

These releases can be seen as great fountains or jets issuing from the black hole, reaching beyond the outer limits of the galaxy. They are streams of particles—protons or electrons—being ejected at close to the speed of light. 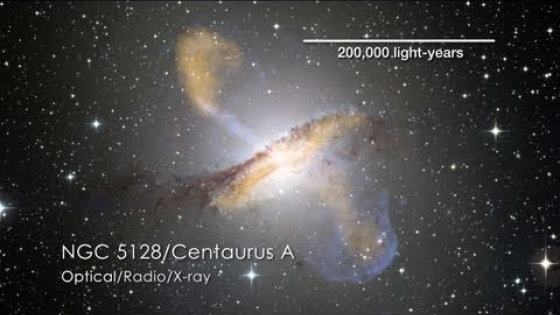 Hickox explains that only in the last 10 years has it become clear that the energy release actually does something profound to the galaxy in which the black hole resides. Astrophysicists now believe this energy feedback controls star formation—the process whereby clouds of molecular gas in the galaxies become sufficiently dense and cold for the gas to coalesce and collapse under gravity into a star. This is a process that occurs normally in galaxies.

“For some reason, the biggest galaxies don’t have any of these dense gas clouds that would make stars, and they should, theoretically,” says Hickox. “They should keep pulling in gas from the larger universe around them and that gas should rain on the galaxy, cool down, and make these clouds. But for some reason they don’t.”

This longstanding cosmic conundrum now has two potential explanations. The energy released by the black hole in the center of the galaxy—the active galactic nucleus—heats the gas, keeping it from cooling down and falling onto the galaxy, and forming these new stars, Hickox explains. Another explanation is that the black hole forcibly blows the gas out of the galaxy.

“There was a lot of debate during the conference as to how exactly this process works and in what kind of galaxies it does work,” Hickox says. “The larger galaxies are quiescent in the sense that they are old and not doing anything, whereas galaxies forming stars are active, changing all the time.”

This variability is yet another black hole mystery, but some insights are coming from observations of the very small black holes that are dispersed around the galaxy. “The big ones take thousands of years to change, so we can never see them change dramatically,” Hickox says. “However, we can see the small ones change on the order of weeks. This new focus created excitement at the meetings.”

He regards the meeting as successful in many respects, one of which is showing off the College. “Our hosting the conference at Dartmouth offered the participants a good impression of what we are,” he says. ”We achieved one of our important goals: to advertise to the scientific community beyond Dartmouth that this exciting, cutting-edge research is being conducted here.“

”Professor Hickox has emerged as a young leader in this exciting field of black hole research. The meeting he and his colleagues organized has strengthened Dartmouth’s already strong international reputation in astrophysics and cosmology," says Brian McNamara of the University of Waterloo in Canada, an invited speaker and a member of the conference’s Scientific Organizing Committee.