Tuberculosis (TB) is second only to HIV/AIDS as the greatest killer worldwide attributable to a single infectious agent, according to the World Health Organization (WHO). With 8.8 million cases in 2010 and 95 percent of TB deaths occurring in low- and middle-income countries, the disease continues to be a major public health problem in the developing world. In a July address to the International Union Against Tuberculosis and Lung Disease, Dartmouth’s C. Fordham (Ford) von Reyn shared news of a promising vaccine in the works.

Developed by von Reyn and colleagues in the United States and Tanzania, the vaccine is known as DAR-901, reflecting its Dartmouth connection as well as the collaboration with Muhimbili University of Health and Allied Sciences in Dar es Salaam, Tanzania. 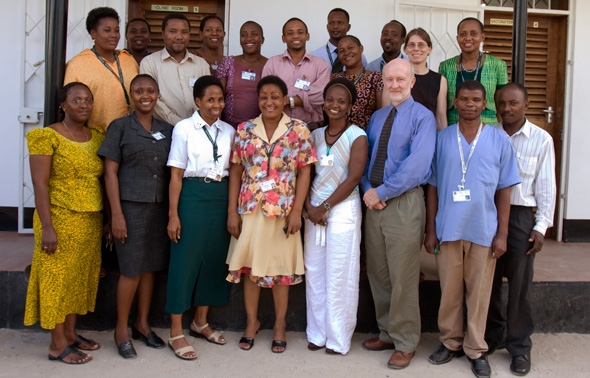 Ford von Reyn (front row, with beard) and his colleagues at Muhimbili University of Health and Allied Sciences in Dar es Salaam, Tanzania, partners in the DarDar collaborative program initiatives in clinical care, training, and research. (photo courtesy of The Geisel School of Medicine at Dartmouth)

DAR-901 is the first effective new TB vaccine since 1928, when Bacille Calmette–Guérin (BCG) was adopted by the Health Committee of the League of Nations. BCG is the only licensed TB vaccine in the world, but it is only about 80 percent effective and then only during the first 15 years of life. Globally, there are more than 20 research groups working on this problem, and Dartmouth’s group is the first to have successfully completed an efficacy trial of a new TB vaccine.

Von Reyn is professor of medicine at The Geisel School of Medicine at Dartmouth, director of the DarDar International Programs in Tanzania, and a member of the Section of Infectious Disease and International Health at Dartmouth-Hitchcock Medical Center. He first took up the challenge of tuberculosis in 1987 at the WHO and began developing a vaccine strategy in the 1990s. 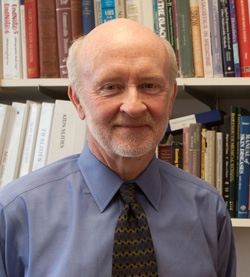 Ford von Reyn is professor of medicine at The Geisel School of Medicine at Dartmouth, director of the DarDar International Programs in Tanzania, and a member of the Section of Infectious Disease and International Health at Dartmouth-Hitchcock Medical Center. (photo by Joseph Mehling ’69)

“When we started out, the most important risk for TB worldwide was HIV infection and TB remains the leading cause of death from HIV in most areas of the developing world,” von Reyn says. “If a TB vaccine is effective in an immunocompromised population it should be even more effective in healthy populations.” Consequently, much of his research and testing has been in Africa, generating longstanding working relationships with colleagues in Tanzania.

The vaccine was originally developed as a drug to regulate immune system activity in the treatment of cancer and allergies. This work was carried out under SR Pharma, a predecessor company to London-based Immodulon Therapeutics Ltd., von Reyn’s current collaborator. The vaccine is produced by growing bacteria related to TB (Mycobacterium vaccae) on agar plates, harvesting the bacteria, and then inactivating the bacteria with heat.

A large, randomized controlled trial of the vaccine began in 2001 in Tanzania, funded by the National Institutes of Health. It involved more than 2,000 HIV-infected subjects, each receiving five doses of the vaccine. The results demonstrated that immunization reduced the rate of tuberculosis among HIV-infected patients by 39 percent—a statistically significant reduction.

“The research that Professor von Reyn and his colleagues are doing is emblematic of our commitment to global health and engagement at Geisel,” says Wiley “Chip” Souba, dean of the Geisel School of Medicine. “Our partnerships with Muhimbili University are enabling this pursuit of a new tuberculosis vaccine, as well as collaborative programs in TB- and HIV/AIDS-related hearing impairment, nutrition, and pediatric care and treatment.”

Looking forward and scaling up

While the study demonstrated the effectiveness of the vaccine, a more efficient process is necessary to scale up production. So von Reyn and Immodulon began a relationship with the Aeras Global TB Vaccine Foundation in Rockville, Md. Using its manufacturing facilities to grow the vaccine in large broth fermenters rather than on small agar plates, Aeras succeeded in developing a new manufacturing method suitable for producing large quantities of the vaccine.

To move forward with the broth-produced vaccine, von Reyn and his colleagues designed the next stage of studies, which will take up to two years. Von Reyn’s collaborators included members of his Dartmouth team, co-investigator Robert Arbeit of Tufts University School of Medicine, and colleagues at Aeras. “We will also have to conduct animal testing with this new production method as well as human safety studies,” von Reyn says.

As with the initial studies of the vaccine, the new human safety studies will first be conducted among volunteers recruited at Dartmouth-Hitchcock Medical Center and then subsequently among HIV-infected subjects in Tanzania. Once this work is completed, a decision will be made as to what additional studies might be required in order to secure global licensing.

Von Reyn would like to see development of the vaccine extended to include its use for prevention of TB in HIV-negative as well as HIV-positive populations, and is pursuing funding to complete the next testing phase. The rates of TB are highest in Africa, where it is the most common cause of death in HIV-positive individuals. However, countries such as India and China, with lower rates of TB but larger populations, have the greatest number of TB cases.

According to von Reyn, "Those countries consider a new TB vaccine a major priority, and with DAR-901, Dartmouth has an unprecedented opportunity to have an impact on this major global health problem.”