With thousands of delegates, reporters, and security staffers in attendance, scoring a seat at either of the upcoming political conventions can be a challenge. But Ester Cross ’15 will have a great view at both. 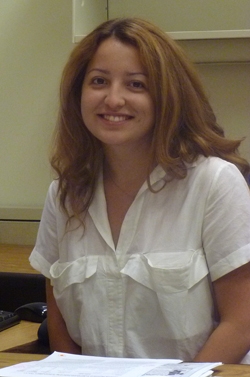 Ester Cross ’15 will travel to Tampa, Fla., and Charlotte, N.C., to cover both political conventions for this year’s presidential election. (photo courtesy of the Rockefeller Center)

Cross will cover the Democratic and Republican conventions as part of her internship with Talk Radio News Service, an organization that supports talk radio. She will attend the Republican National Convention (RNC) in Tampa, Fla., from August 27-30 before traveling to Charlotte, N.C., for the Democratic National Convention (DNC) from September 4-6.

The RNC schedule for Monday, August 27, was abbreviated due to Tropical Storm Isaac, and weather may necessitate further changes in the schedule.

Cross will have press credentials and work on the floor at the conventions, providing support and covering stories in the area known as “radio row.” In addition, she will be writing a blog series for the Nelson A. Rockefeller Center.

“The appeal for me in covering the national conventions stems from an interest in the interaction between media and politics,” she says.

On campus, Cross, who is from Los Angeles, Calif., writes for the news section of The Dartmouth. She was a Rockefeller Center First-Year Fellow, interning with Congressional Research Service in Washington, D.C., this summer. A Great Issues Scholar who plans to major in government, she works as a research assistant for Brendan Nyhan, assistant professor of government.

“I’ve been lucky enough to have Ester working with me as a research assistant since January,” Nyhan says. “I’m sad to lose her for a couple of weeks, but eager to hear about her experience at the conventions—it’s a valuable learning opportunity for her as both a journalist and a student of political science.”

The Rockefeller Center provided financial support for Cross to attend the conventions.

“The Rockefeller Center has been instrumental in providing me with the opportunity to cover both conventions,” says Cross. “Rocky helped me find an organization that linked me to my internship with Talk Radio News Service, provided the necessary financial support, and is hosting a blog of my observations and experiences on the Rockefeller Center’s website.”

While the Rockefeller Center has helped provide this professional opportunity, the conventions are also of personal interest for Cross.

“I am excited to take a front row seat in the most important election of my generation,” she says.