Alcohol interventions implemented in the last year in conjunction with a national organization founded by Dartmouth are showing promising results, and plans are under way to expand the program, Dartmouth officials told their peers at the third session of the Learning Collaborative on High-Risk Drinking. 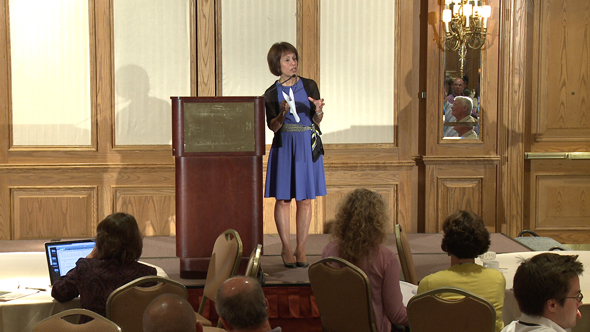 The 10-member Dartmouth team joined groups from 31 other institutions from across the country in Washington, D.C., last month to learn from one another about improving the health of their students by reducing the harms associated with high-risk drinking.

The July 9-11 session was the third face-to-face meeting of the group, led by the Dartmouth Institute for Health Policy and Clinical Practice, and also attended by representatives from the National Institute on Alcohol Abuse and Alcoholism. Collaborative members intend to publish their findings a year from now.

“Collaborative members have developed the vision, resources, and space to create new ideas and implement transformative interventions,” Dartmouth President Carol L. Folt told the conference. “I urge you to think about how you can create an environment for more voices to be heard, and for creativity and innovation from all areas of campus.

“The Collaborative approach allows a diverse group of faculty, administrators, and students across institutional types to effect change, using evidence to achieve our objectives,” she said.

The Collaborative is the inaugural effort of the National College Health Improvement Project (NCHIP), which was founded at Dartmouth in 2011 to improve student health. By taking on high-risk drinking, the group is seeking to address a problem that affects nearly four out of 10 students nationwide.

Former Dartmouth President Jim Yong Kim, a physician who created NCHIP while at Dartmouth, attended the Washington event to reaffirm his commitment to the effort. Kim left Dartmouth at the end of June to serve as president of the World Bank.

At the learning session, Dartmouth’s DCHIP team presented information on its collaboration with Dartmouth anthropology Professor Sienna Craig’s undergraduate medical anthropology course. In the course, 14 students applied research methods to investigate high-risk drinking at Dartmouth in the context of a holistic exploration of student life.

“Working with Professor Craig and the students was a rewarding opportunity to connect learning in the classroom with life outside the classroom, while also providing the DCHIP team with a rich source of information about student life,” said Aurora Matzkin ’97, Dartmouth special assistant to the president for student health and DCHIP team leader.

Additionally, the team shared its experience with a pilot program targeting “pre-gaming”—drinking alcohol before going out to socialize, often at events offering more alcohol—in a first- year residence hall. The DCHIP team presented information on the qualitative and quantitative methods it is using to collect information about this effort.

Team members also discussed the changes that result in relationships between students and undergraduate advisers (UGAs) who work in residence halls when procedures involving alcohol consumption change. The program includes residence hall walk-throughs by UGAs during peak drinking hours on certain nights, and connecting students who pre-gamed to a program called Brief Alcohol Screening and Intervention for College Students (BASICS).

BASICS, which was provided for students with alcohol incidents at Dartmouth in 2011-2012, is expanding in residence life and in athletics. Initial results showed that within 90 days after the intervention participants had significantly reduced their alcohol consumption, which is similar to dozens of other randomized studies of this intervention.

“There are some really remarkable things happening at Dartmouth right now because we are getting the right people, in the right place with the right resources, and the administrative will to try something different,” said Matzkin.

During the current summer term, and continuing over the next year, approximately 1,000 Dartmouth varsity athletes will participate in BASICS as part of the Dartmouth Peak Performance (DP2) program, which seeks to aid varsity student-athletes in reaching their potential through strategies for physical and mental wellness.

“For our student-athletes to perform at their best, they need to achieve excellence athletically, academically, and personally,” said Drew Galbraith, Dartmouth’s senior associate athletics director for Peak Performance. “Incorporating BASICS into our programming is another way we will support our athletes in realizing their full potential, whether on the field or in the classroom.”

From a development perspective, the brain isn’t really prepared to assess how one’s doing and advocate or protect itself until nine or 10.