While the 2012 Summer Olympics will officially end on Sunday, August 12, competition has come to a close for the four Dartmouth alumni who represented the United States in London. Final results include: 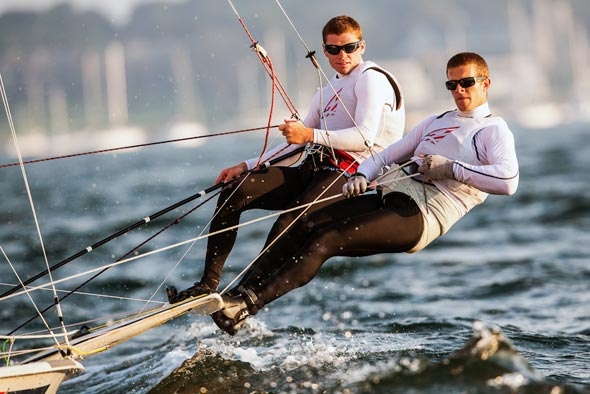 Erik Storck ’07 (left) and his crewman, Trevor Moore, placed in the top 10 in four of their 15 Olympic 49er class sailing races. The duo finished 15th in the overall standings. (photo by Amory Ross / U.S. Sailing)

Anthony Fahden ’08 (Lightweight rowing): After a slow start in their first Olympic heat on July 28, Fahden and his boatmates rebounded to take first in the repechage—the consolation heat—on July 29, earning a spot in the semifinals. The crew advanced to the “B” final after finishing fifth in the semifinals with a time of 6:05.06. Fahden and his crew took second in the “B” final on August 2, with a time of 6:09.23, earning an eighth-place overall finish in the lightweight four competition.

Sean Furey ’04, Thayer ’05 and ’06 (Track and field): Furey placed 17th in Group B of the javelin throw with a mark of 72.81 meters. He did not qualify for the finals, but was one of three Americans in the field to throw better than 70 meters.

Erik Storck ’07 (Sailing): Storck, the skipper of the U.S. 49er class boat, and his crewman, Trevor Moore, of North Pomfret, Vt., moved into 17th place in the overall race standings after the first weekend of competition, but failed to qualify for the medal race. In the final preliminary races on August 6, the duo recorded their fourth top 10 finish, taking eighth in race 14 with a time of 31:52. The duo finished 15th in the overall standings.