The Telluride Film Festival, occurring each Labor Day weekend in Colorado, is considered one of the premier arts events in the country, and consistently presents a remarkable and diverse slate of films. 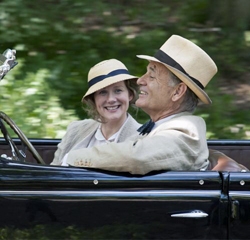 Telluride at Dartmouth opens on September 14 with Hyde Park on the Hudson, starring Laura Linney and Bill Murray. (photo courtesy of Focus Features)

Each year, six films come directly from Colorado for special advance screenings at the Hopkins Center for the Arts. This is a unique opportunity for the Dartmouth community to get a sneak peek at the latest international films—often months before they’re released.

The first film, Hyde Park on the Hudson, screens Friday, September 14. All six Telluride films will be shown in Spaulding Auditorium.

Telluride at Dartmouth was born 27 years ago through a long-standing relationship between the Colorado festival and Dartmouth.