Five Dartmouth graduate students in engineering, earth sciences, and ecology, bundled into puffy parkas and insulated pants, are standing on a layer of ice a mile thick, marveling at a panoramic 360-degree blanket of white. “It makes me feel so small. It’s humbling,” says earth sciences graduate student Lee Corbett. Tonight it will be near zero and she’ll be sleeping in a tent. 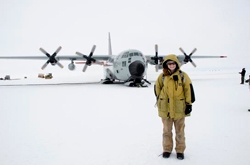 Graduate student Ali Giese after exiting the C-130 Hercules plane that transports the scientists to Summit Station, a research center at the apex of the Greenland ice sheet. (photo by Courtney Hammond ’11)

Only a matter of hours earlier, it was in the high 70s as she and the other IGERT students were boarding a C-130 Hercules transport plane at the Air National Guard base in Scotia, N.Y., for their flight to Kangerlussuaq, the site of an international science center at the edge of the Greenland ice sheet. After a cold, cramped flight on a plane designed for cargo, not human comfort, they touched down in Kangerlussuaq, excited already by their glimpses of Greenland from the air. “Most of the scientists on the flight huddled around the two windows in the tail, pointing and yelling over the roar of the engines,” Corbett posted on the IGERT student blog.

The Greenland Field Seminar is one of the defining pieces of Dartmouth IGERT, which is a program of the Dickey Center’s Institute of Arctic Studies. It’s one of the flagship interdisciplinary initiatives of the National Science Foundation. The program is training a new generation of scientists and engineers to work across disciplines on the effects of rapid climate change in polar regions.

“It’s exciting to be in a place I’ve spent countless hours reading about. Just being here reinforces the significance of the research in which I participate at Dartmouth,” says earth sciences IGERT student Ali Giese.