Scholars may have some of the most extensive training in their fields, but writing about their expertise for media outlets doesn’t always come naturally. That’s where “The Op-Ed Project” comes in. 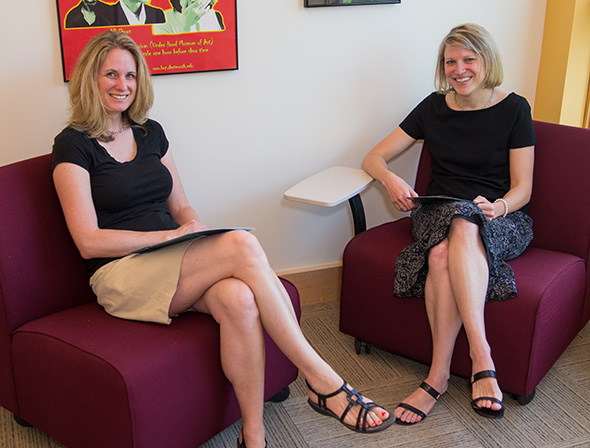 Professors Jennifer Lind and Colleen Boggs have teamed up to bring to Dartmouth The Op-Ed Project, a program that teaches professors how to give academic research a voice in public forums.

“As faculty members, we have particularly important knowledge to contribute, but our training is generally not geared towards preparing us for thought leadership outside of our classrooms and our specialized scholarly contexts,” says Boggs, an associate professor of English. “The Op-Ed Project will offer training in how to translate the knowledge and communicative skills we have towards a larger audience.”

Lind first heard of The Op-Ed Project in 2010, while taking part in a fellows program in Washington, D.C. Upon returning to campus, she sent an email to colleagues to gauge interest in bringing the program to Dartmouth. Boggs was particularly intrigued by the idea, and Lind and Boggs discovered they had similar questions about Dartmouth’s voice in public conversation.

“We were both interested in how Dartmouth’s outstanding scholar-teacher model resonates and translates into the larger public arena,” says Boggs.

Thanks to their advocating, The Op-Ed Project held an initial workshop for 18 professors in March, funded by the Dean of the Faculty’s office. The workshop asked faculty members to pinpoint their expertise and to think about ways to connect their research with current events. Lind says it is often a struggle for scholars of specialized or historical subjects to find a role in contemporary conversation.

While the workshop’s goal was to assist professors with communication in public forums, there was an additional benefit, as faculty members from different departments met and discussed ways their research interacted.

“Faculty from across the College gathered in a supportive and intellectual setting,” says Lind, an associate professor of government. “This program will enrich our faculty experience here, encourage cross-pollination of ideas across departments, and build closer relations across the College.”

The seminar was enthusiastically received, and Lind and Boggs looked to develop a yearlong pilot program. They obtained funding from the Office of the Provost, the Leslie Center for the Humanities, the Dean of the Faculty, the Dickey Center, the Dartmouth Center for the Advancement of Learning, and the Institute for Writing and Rhetoric, and started outlining the program.

The Op-Ed Project will hold monthly conference calls with participants. Beginning in October, it will lead four on-campus workshops. The workshops will help faculty members make complex research digestible for broad audiences, and suggest further strategies for getting work published in mainstream media. It will also offer tips about how to connect with editors and pitch an article for an op-ed.

“Our goal is that, after this yearlong program, faculty who never thought of themselves as poised to shape the public debate will see themselves as having an important role to play,” says Lind.

Lind and Boggs believe the project is not only significant for faculty members, but also benefits public discourse. “The importance of this program lies in helping all of us by increasing the scope and diversity of informed voices that shape our larger public conversation,” says Boggs.

Already, the program is paying dividends. Since the initial workshop, Boggs has contributed to The Huffington Post and is working on an op-ed to run in The New York Times. Lind has published articles this year in The Atlantic and Foreign Affairs.

“Op-eds aren’t the only way into public debates,” says Lind, “but they are a very important and visible way in.”