Anne Krueger, noted economist and professor at Johns Hopkins University, will speak August 16 as part of the “Leading Voices in U.S. Foreign Policy” lecture series. The talk, free and open to the public, will begin at 4 p.m. in the Hopkins Center’s Moore Theater. 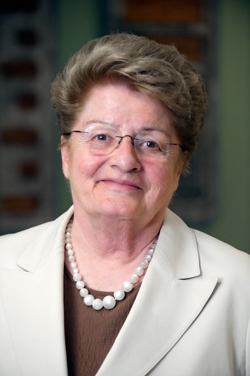 Krueger is one of six speakers in the current series, which has also included a global health leader, a Pulitzer-prize winning journalist, a retired Navy Admiral, a climate change diplomat, and a former Defense Department official.

The series supplements a government class for sophomores, who spend the summer term on campus. The course, “America and the World: Contemporary Issues in U.S. Foreign Policy,” is taught by Benjamin Valentino, associate professor of government. Each week, a faculty member leads the class, giving an introductory lecture to prepare students for the address by the visiting presenter, who speaks to the class and the public later in the week.

“Although Americans usually think of the economy as a domestic issue, America’s economic health is critically linked with developments abroad,” says Valentino. “Few people understand this fact and its ramifications for U.S. foreign policy better than Anne Krueger, who has worked at high levels in the key international institutions designed to regulate world trade, development, and finance.”

Krueger is a professor of international economics at the School of Advanced International Studies at Johns Hopkins. She is also the Herald L. and Caroline L. Ritch Emeritus Professor of Sciences and Humanities in the economics department at Stanford University.

She served as the first deputy managing director of the International Monetary Fund from 2001 to 2006 and has served as vice president of economics and research at the World Bank. She has taught at Stanford, Duke University, and the University of Minnesota and has held visiting professorships at numerous universities, including Massachusetts Institute of Technology, Northwestern University, and Bogazici University in Istanbul.

Krueger is a distinguished fellow and past president of the American Economic Association. She is a senior research fellow at the National Bureau of Economic Research and has published extensively on economic development, international trade and finance, and economic policy reform.