Can video games be a tool for addressing national problems? How might games improve workforce preparedness, or educate consumers about saving energy? These were some of the questions Professor Mary Flanagan and 19 other academics discussed at the White House Office of Science and Technology Policy’s (OSTP) inaugural “Academic Consortium on Games for Impact” in Washington, D.C. The July 26 consortium was attended by nearly 50 government and corporate gaming and software representatives. 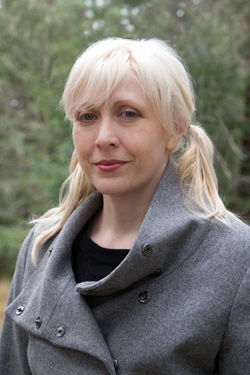 “I’m pleased that games are being taken seriously, at the very highest level of our society, because they can have a huge social impact,” says Flanagan, a professor in the Department of Film and Media Studies, the Sherman Fairchild Distinguished Professor in Digital Humanities, and director of Tiltfactor Laboratory.

“And even though about 170 million Americans play videogames, they continue to cause a lot of cultural anxiety,” she continues. “ ‘Are my kids playing videogames too much?’ ‘Are games good for you?’ As games increasingly become tools for learning, we have to look at them critically. And that’s what this consortium will do.”

The same day she attended the White House consortium, Flanagan learned that she had been awarded a grant from the National Endowment for the Humanities (NEH) for her project “Metadata Games: Improving Access to Humanities Artifacts.” The $324,872, three-year grant is one of the NEH’s seven inaugural digital humanities implementation grants and will allow Tiltfactor to expand its existing Metadata Games project. This open-source, Internet-based computer game for archival data systems was featured in a Chronicle of Higher Education article in May 2011. Developed by Flanagan and Peter Carini, the archivist at Dartmouth’s Rauner Special Collections Library, it allows users to tag and help identify photos in various archival collections.

“Games provide a fun way to incorporate the knowledge and enthusiasm of the public with the museums, archives, and libraries around us, and this project is a big step forward in thinking about creating games with national impact,” says Flanagan, adding that the funding will allow Tiltfactor to develop support for other media formats in addition to the image-based system currently in place. “Using crowdsourcing is a rather new idea, but one that we’ve shown to be successful in collecting useful data for archives. With this funding, our team can realize the potential for Metadata Games to enhance our national knowledge base across cultural institutions.” 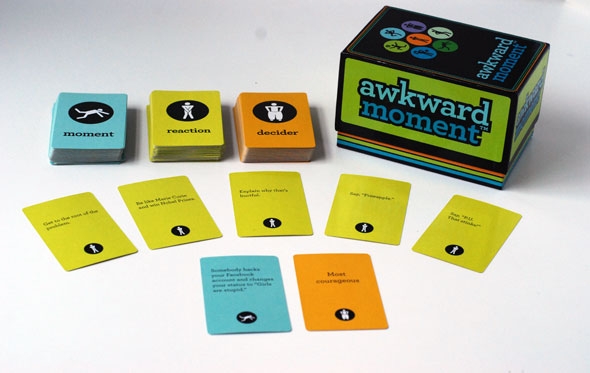 Flanagan and her Tiltfactor team will launch two new games, buffalo and Awkward Moment, from August 16-19 at Gen Con, the popular annual gaming convention in Indianapolis, Ind., which last year attracted more than 35,000 attendees. They will also be demonstrating a new version of their innovative POX: Save the People game called ZOMBIEPOX. In the original POX game, which is also available in an iPad version, players strive to protect the population from the spread of infectious disease, while in ZOMBIEPOX players fight the spread of zombies that threaten to take over the town.

Awkward Moment and buffalo were developed as part of Flanagan’s National Science Foundation-sponsored project, “(EAGER) Transforming STEM for Women and Girls: Reworking Stereotypes & Bias” (STEM is an acronym for science, technology, engineering, and math). As she recently told Dartmouth Now, Flanagan hopes these and other games being developed by Tiltfactor will “transform—and ultimately dispel—stereotypes, biases, and other factors that subconsciously limit girls’ options to pursue careers in science, technology, engineering, and math.” 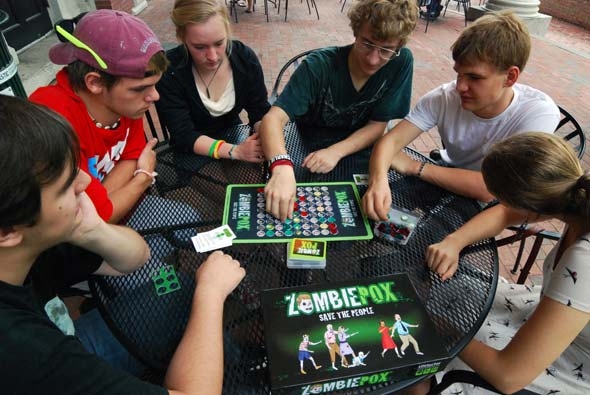 Dartmouth students play ZOMBIEPOX, an offshoot of the innovative Tiltfactor game POX: Save the People. The new game will be demonstrated at Gen Con. (photo by Sukdith Punjasthitkul, Tiltfactor)

Flanagan is the author of Critical Play: Radical Game Design (The MIT Press), and she is an internationally renowned expert in games for creative expression and social impact. In June, she was the keynote speaker at University of Westminster’s International Political Simulations and Games Workshop, and spoke at the Smithsonian American Art Museum’s symposium on “The Art of Video Games,” in conjunction with the institution’s first art exhibit on video games. And in May, her work was featured in the contemporary art forum, “Critical Play—The Game as an Art Form,” at the Museum of Modern Art in New York (Flanagan’s presentation begins at the 5:15 mark of this video). She also recently received British Arts Council funding with U.K. artist Ruth Catlow, with whom she will collaborate on a game-related public art work that incorporates elements of urban planning.

“What we’re seeing is a dramatic and timely shift in the use of games for social good—in science, the humanities, the arts, and wellness,” says Flanagan. “Games are their own art form and have the capacity to change thinking and to help solve urgent societal problems.”