In this week’s lecture at Dartmouth, Rwandan Minister of Health Dr. Agnes Binagwaho said foreigners often have misperceptions about what has fueled her country’s tremendous health care improvements over the past two decades.

“It isn’t a miracle,” Binagwaho said. “It is logical.” 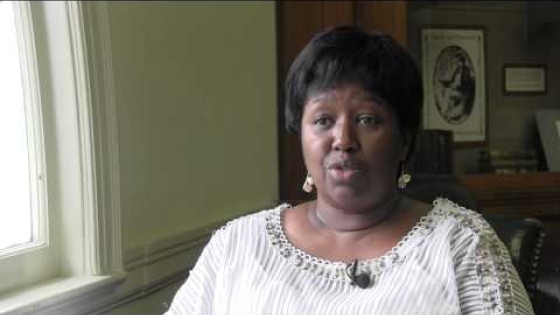 Binagwaho credited the progress of health care in her country to systematic planning, monitoring, and community participation.

In the lecture, sponsored by the Dartmouth Center for Health Care Delivery Science, Binagwaho outlined four pillars vital to the success of health care systems: equity, science, participation, and sustainability. Rwanda’s progress, Binagwaho said, is a result of working toward those ideals. Since 1994, life expectancy for Rwandans has risen from 28 years to 55 years, according to Binagwaho. Since 2005, child and maternal mortality have dropped by over 50 percent.  In the past decade, Rwanda has also seen a 70 percent decline in death rates from malaria, tuberculosis, and HIV.

Binagwaho, who specializes in emergency pediatrics and the treatment of HIV/AIDS, has helped rebuild her country’s health system since the Rwandan Genocide in 1994. Grassroots efforts have had a lasting effect on Rwandan health, Binagwaho said. 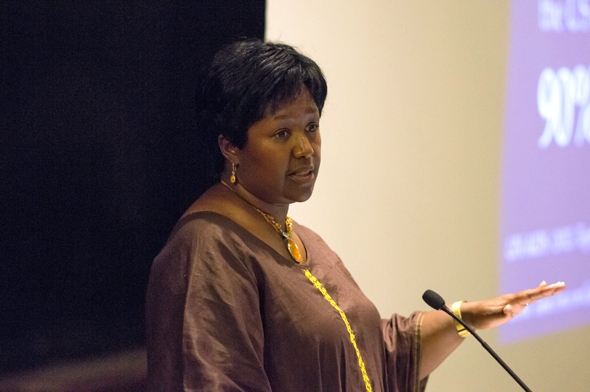 Dr. Agnes Binagwaho said the Rwandan health care system has been successful, in large part, because of community participation. (photo by Eli Burak ’00)

“We don’t have enough doctors; we don’t even have enough nurses,” said Binagwaho. But Rwandans have been successful by “using all the capacity we have.”

Facing this shortage of medical workers, Rwanda has trained hundreds of “community health workers” across the country to diagnose malaria and coughs and direct patients to hospitals. The use of radio broadcasts and text messaging allows Rwandans faster access to vaccinations, examinations, and treatment.  Many of these trained workers carry cell phones and are able to send and receive information about disease outbreaks and health updates.

On July 27, the Geisel School of Medicine announced a partnership with six other U.S. medical schools and the Ministry of Health in Rwanda on the new Rwanda Human Resources for Health (HRH) Program. Former President Bill Clinton recently announced the seven-year project, which will assist the Rwandan government in constructing a high quality and sustainable health system.

“We look forward to joining the faculty from these leading institutions to work together to support sustainable development through country-led improvements in health and education,” said Lisa Adams, a professor at the Geisel School and principal investigator for the program.

The U.S. institutions will send faculty members to Rwanda, which has a shortage of health care workers, in an effort to train and educate the next generation of doctors, clinicians, medical educators, nurses, and midwives. Faculty members will serve 12-month terms in Rwandan hospitals, in an effort to expand and improve the health care workforce so it can be sustained without foreign aid by the program’s conclusion in 2019.

“These U.S. academic institutions have made a commitment that is unprecedented in global health,“ said Dr. Binagwaho.

Each year, Geisel will send physician educators in the fields of anesthesia, internal medicine, pediatrics, and surgery specialties to Rwanda, where they will work alongside faculty members from the other participating medical schools.

Binagwaho also spoke about the relationship between economic and health care growth, saying that the two are closely intertwined. There is a correlation between child mortality and poverty, she said, and investing in quality health care is investing in development. However the investment is made, Binagwaho said, it has to be something that can be managed and sustained into the future.

That reality is improved health care equity across genders, age groups, and geographic regions, according to Binagwaho. As an example, she displayed photos of a new, state-of-the-art medical facility, the Butaro Hospital—the first cancer treatment center in rural Rwanda. After a recent tour of the 150-bed hospital, former U.S. President Clinton called it “a good place to be sick,” said Binagwaho, drawing laughter from the audience.

Binagwaho hopes the strides Rwanda has made will inspire other nations to revamp their health care system. Rwanda’s health care progress cannot be sustained on its own, she says, it needs neighboring countries to improve their own medical systems so that their citizens do not flood Rwandan hospitals seeking better health care.

In 2010, Dartmouth awarded Binagwaho an honorary Doctor of Science degree. Follow her blog at www.dr-agnes.blogspot.com and on twitter: @agnesbinagwaho