The Scientific Side of Steroid Use and Abuse

Leslie Henderson is concerned about steroid abuse, not necessarily by sports luminaries like Barry Bonds and Mark McGwire, but rather by adolescents.

“There is this disconnect among young people that somehow your emotions, your thought processes—things that have to do with your brain—are separate and different from what steroids may be doing to your body—your muscles, your heart, or your liver, or anything like that,” says Henderson, a professor of physiology and neurobiology, and of biochemistry at the Geisel School of Medicine at Dartmouth. She is also the senior associate dean for faculty affairs at Geisel. 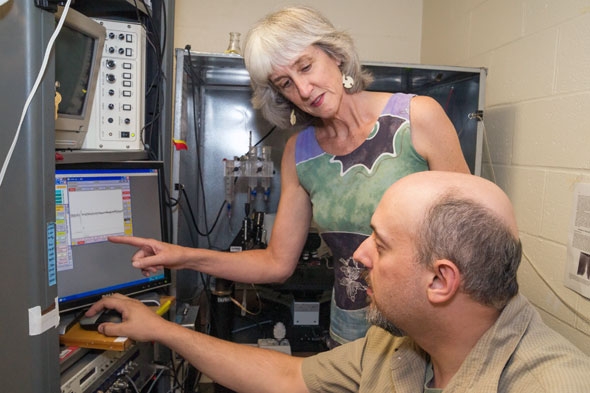 Postdoctoral Research Associate Joseph Oberlander and Professor Leslie Henderson examine patterns of electrical activity (action potentials) recorded from brains of mice exposed to anabolic androgenic steroids. Chronic steroid exposure changes patterns of activity in regions of the brain that are critical for the expression of anxiety. (photo by Eli Burak ’00)

Henderson reports that websites targeting steroid users often acknowledge that steroids can affect your body—that’s why they are taken—or they can make you aggressive. However, they do not say anything about changing the way your brain works. “Teenagers need to recognize that these drugs actually do things to your brain, and your behavior comes from your brain,” she says.

The drugs of concern are anabolic-androgenic steroids (AAS), which are synthetic derivatives of testosterone, originally designed to provide enhanced anabolic (tissue-building) potency with negligible androgenic (masculinizing) effects, according to Henderson and her long-time Dartmouth collaborator Ann Clark, a professor in the Department of Psychological and Brain Sciences.

“Although originally developed for clinical use, AAS administration is now predominantly one of abuse, and the medical benefits of low doses of AAS stand in sharp contrast to the potential health risks associated with the excessive doses self-administered by athletes,” they write in a 2003 paper.

In addition to the danger implicit in high dosages is the range of uncontrolled variability in the composition of these illicit synthetics. “Because of their chemical modifications they can also directly interact with neurotransmitter receptors in the brain to change the way they function,” says Henderson. These changes are reflected in manifestations of anxiety, as seen in Henderson’s laboratory experiments.

However, little regard is given to these potential dangers when the primary objective is a competitive edge in athletic pursuits. Compounding these caveats are the implications of abuse at an early age.

Studies have shown there are “critical periods”—periods of time during adolescence when exposure to steroids can impose permanent changes in both brain organization and function, leading to physiological and psychiatric effects that may still be prevalent even in middle age. The age at which you take them also affects their persistence. From studies using rodents as an animal model, other investigators have also found that, “if you take steroids as an adolescent, those effects are much longer lasting in terms of their negative effects on behavior, especially aggression, than if you take them as an adult,” Henderson comments.

In her laboratory work, Henderson has looked at three major behavioral systems typically associated with steroid abuse—reproduction, aggression in males, and anxiety in both sexes.

“We did a lot of work looking at the neural control of reproduction and regions of the brain that were affected by chronic steroid abuse, as well as the transfer centers in the brain that were affected acutely by exposure to these steroids,” says Henderson. “More recently, we’ve also looked at the effects of these steroids on anxiety, elucidating a biochemical pathway that is integral to this.”

When Henderson says “we” in reference to her research, she means the “royal we.” As a senior associate dean in the medical school, her hours at the bench are expectedly limited. “However, our lab is still active. In fact the past couple years we’ve had probably our best and most high-profile publications,” says Henderson. “Right now the lab has a senior postdoc, a graduate student, and my lab manager, and they are doing all the heavy lifting.” Donna Porter is the laboratory manager working with Postdoctoral Associate Joseph Oberlander and graduate student Marie Onakomaiya.

As if she were not busy enough, Henderson is committed to active outreach—bringing science to the public. In November, she is scheduled to participate in a local “Science Café.” These are interactive events that take place in casual settings such as pubs and coffeehouses, are open to everyone, and feature an engaging conversation with a scientist about a particular topic.

“It is just something that for me as a scientist I think is incredibly important,” Henderson asserts. “We take a lot of taxpayer dollars, and if we can’t go out and make what we’re doing relevant to the people that are supporting us, we shouldn’t be doing what we are doing.”