Dartmouth’s Year of the Arts and the Hopkins Center’s 50th Anniversary season kicked off in style this week, as renowned cellist Yo-Yo Ma delivered a stirring performance in a sold-out Spaulding Auditorium.

Ma, who performed unaccompanied, featured music by Johann Sebastian Bach, but also included pieces by Ahmed Adnan Saygun, George Crumb, and Mark O’Connor. A 16-time Grammy Award Winner and a recipient of the Presidential Medal of Freedom, Ma last performed at Dartmouth in 2001. 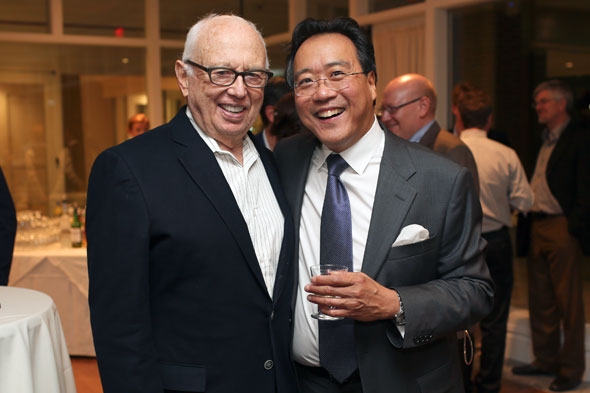 After his performance, Yo-Yo Ma (right) visited with abstract artist Ellsworth Kelly, who created the ‘Dartmouth Panels’ sculpture, at a reception at The Hanover Inn. (photo by Rob Strong ’04)

Before and after his performance, Ma kept busy by interacting with Dartmouth students and community members—even giving a late night talk at a sorority house.

Prior to the concert, Ma invited about 25 members of the Dartmouth Symphony Orchestra to watch his rehearsal. Afterward, he chatted with the students for over an hour, discussing everything from music to family life to dealing with stage fright.

“Yo-Yo Ma is an extraordinary ambassador of music and creativity for students,” says Margaret Lawrence, director of programming at the Hop. “Throughout his time at Dartmouth, Yo-Yo sought out students, asking them to tell him about themselves, encouraging them to keep playing music, and provoking considerations of larger global issues.”

Following his performance, Ma attended a reception with abstract artist Ellsworth Kelly and members of Dartmouth’s Board of Trustees, hosted by the Office of the President at The Hanover Inn.

Around 11 p.m., Ma stopped by Kappa Kappa Gamma sorority, where he signed autographs, took photographs and talked with students, asking them questions about their Dartmouth experience and interests. 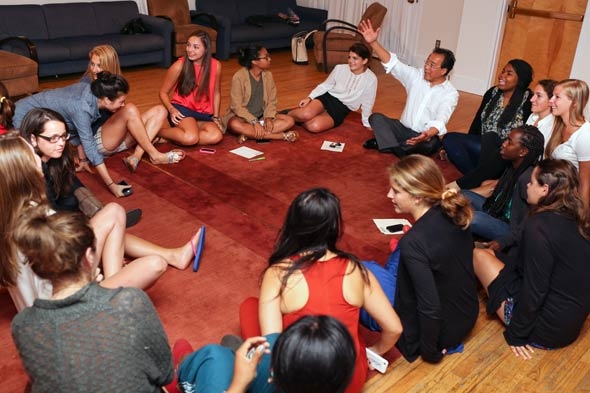 Yo-Yo Ma chatted with students at a sorority about a range of topics, from family life to academic interests. (photo by Rob Strong ’04)

“Yo-Yo was very genuine and seemed excited to meet and relate to us on a personal level. He was curious about our academic interests, whether that included music or not,” says Chidi Anyadike ’13. “I also thought it was really neat that he opened up to us and talked about his relationship with his daughter and his family life.”

Gwendolyn Tetirick ’13, a member of Kappa Kappa Gamma, says talking with Ma was an amazing experience.

“Yo-Yo sat in a circle on the floor with us and for 20 minutes asked us questions,” says Tetirick. “It is a rare and wonderful thing to meet someone who has not lost humility and kindness despite being so admired.”