“CarSafe” is a driver safety app that detects dangerous driving behavior using dual-cameras on smartphones. This is the latest smartphone app to come out of Dartmouth and is featured in the September 25 NewScientist. The Android app was developed by Professors Andrew Campbell and Lorenzo Torresani in the Department of Computer Science, and Dartmouth’s Smartphone Sensing Group.

The new app offers safety features typically found only in top-of-the-line cars. Simply mount the phone on the windshield with one camera facing the driver and the other facing the road. It operates with navigation apps and monitors the driver and the road while calling attention to dangerous conditions.

The video below, produced by Giuseppe Cardone of the University of Bologna, provides more details on the app and its operation. Cardone was a visiting PhD student working with Campbell and has since returned to Bologna.

“CarSafe uses advanced computer vision and machine learning algorithms on the phone to process real-time video from the front and back cameras,” Campbell explains. “The front camera tracks the driver’s head position and direction as well as eyes and blinking rate as indicators of microsleep, drowsiness, and distraction.”

If the app detects any of these conditions it alerts the driver by displaying a coffee cup icon on the phone’s touch screen and the phone bleeps. At the same time, the other camera monitors the distance between cars to determine whether the driver is too close to the car in front, as well as tracking lane changes and weaving. Similarly, the driver is informed if any of these events happen. 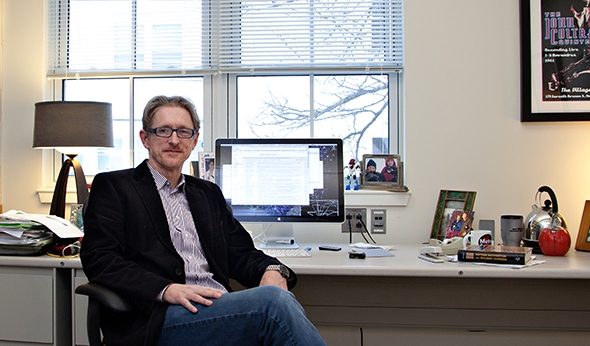 “One of the breakthroughs the team made was getting computationally demanding algorithms to work in real-time on a phone and coming up with fast camera switching techniques to process each camera’s video in real-time,” Campbell says.

This app follows the release of the WalkSafe pedestrian safety app from the same group last year. The team is currently working on a larger-scale evaluation of the app and plans to release it early next year.

Collaborators on the project included researchers at the Autonomous National University of Mexico, Microsoft Research Asia, and the University of Bologna. The project was conceived by Thomas J. Bao ’12 as part of his senior thesis and Chuang-Wen You who is a postdoctoral fellow in the Smartphone Sensing Group.