Alan L. Gustman, who in July completed a two-year term as chair of the Department of Economics, is the Loren M. Berry Professor of Economics. He researches labor economics and the economics of aging: retirement, pensions, Social Security, and saving. He is currently investigating the effects of the Great Recession on retirement and saving, how best to measure pension values, and how various Social Security policies would affect Social Security benefit claiming and retirement. 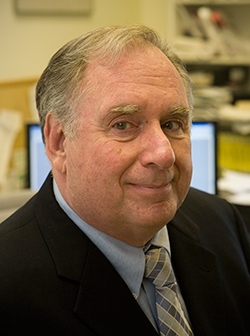 A research associate at the National Bureau of Economic Research in its programs in Labor Studies and Aging, Gustman is also on the Steering Committee of the Health and Retirement Study and is a member of the University of Michigan Retirement Research Center’s executive committee. He joined the Dartmouth faculty in 1969, and will teach “Economics 21: Intermediate Micro Economics” in the fall and winter terms. Gustman’s research is funded by the National Institute on Aging, the Social Security Administration, and the Alfred P. Sloan Foundation.

Gustman has written articles for Econometrica, Journal of Public Economics, Journal of Political Economy, and other journals, and is the author of two books. He most recently co-authored Pensions in the Health and Retirement Study (Harvard University Press, 2010) with longtime colleagues Nahid Tabatabai, a research associate in Dartmouth’s economics department, and Thomas Steinmeier, an economics professor from Texas Tech University. In November 2011, the Chicago Tribune reported on the trio’s study that found Social Security is not redistributing benefits as intended (this article is forthcoming in the Journal of Pension Economics and Finance).

What do voters need to know about the current state and the future of Social Security?

They need to know that there are hard choices that need to be made very soon. By making these choices in a timely fashion, households and firms will be given enough lead time to adjust their planned saving and retirement behavior. There are real penalties to procrastination.

What advice do you have for people who are trying to save money and also save for retirement?

The goal is to generate retirement saving sufficient to allow the family to continue to consume in retirement at the same level they have enjoyed throughout the decades they were at work. A first step is to fully participate in whatever tax-favored saving plan is available, 401K or other employer provided pensions, IRA, or related plans. Whatever the current pressures on saving plans, the household should not leave any matching employer provided funds on the table by failing to fully participate in their retirement plans.

Formulate a plan early. Many families do not pay attention to their retirement needs until they are in their 50s. Expect to live a longer life than those who are currently retired, and thus to have a longer period of retirement to finance, and to face considerable health expenditures in retirement. Be open to working longer, and secure a job that will allow you to work longer if you so choose. The longer one works, the less the need for large saving to support a long retirement period.

Do you have a retirement savings tip that might not be well known?

Carefully investigate the alternative sequences for claiming Social Security benefits available to husbands and wives. After full retirement age, but before reaching age 70, the high earner in a family can claim spouse benefits based on the earnings of the lower earning spouse. However, by deferring his or her own benefits until age 70, the high earner will receive an 8 percent payment increase for each year his or her own benefits are delayed. By coordinating claiming behavior, the total Social Security benefits enjoyed by the household can be significantly increased. Related strategies are available to households with one primary earner.

Over the past decade, you and your colleagues have developed and improved economic models for retirement and saving. How has the recession changed these models?

When the economy experienced its normal ups and downs, it was possible to model the effects of job loss experienced by some in their 50s and early 60s by simply distinguishing those who lost their jobs involuntarily from the vast majority who were permitted to continue to work until they decided it was time to retire. The Great Recession has potentially caused greater displacement.

This might have two effects on retirement. First, those who lose their jobs as they approach retirement age are less well prepared for retirement than they had planned. This might lead them to choose to work longer. But their labor market opportunities are less attractive than in a steadier economic environment. As a result, they may choose to retire after having lost their jobs. We now are exploring how these conflicting forces are playing out, and consequently how and why retirement plans have changed as a result of the Great Recession.

Your research shows that people who are close to retirement age have been only slightly affected by the recession. Why is that? Is there anything this group needs to be concerned about if the recession continues?

For a typical household approaching retirement, Social Security and pensions account for about half their wealth. Social Security has been unaffected by the recession. Two-thirds of the value of the pensions held by those approaching retirement at the onset of the recession are represented by defined benefit plans, pensions, plans that promise to pay an annual benefit based on final salary and years of service. For the near-retirement age population, 401k type pensions are less important. Moreover, although housing values have clearly fallen, research by my Dartmouth colleague Steve Venti shows that housing wealth is not consumed until one or another spouse dies or becomes very ill.

Over the period of the Great Recession, household wealth has fallen only about 3 percentage points for those approaching retirement age at the onset of the recession. And most of those approaching retirement age enjoyed seniority and did not experience layoffs as a result of the recession. However, if economic activity remains sluggish and the Federal Reserve keeps interest rates at very low levels, a given amount of retirement savings will generate less income than in more normal times. This is a major concern for those who are close to retirement age.

As our research has shown, sometimes the outcomes are different from what policy makers at first expected. Nevertheless, specific policy changes now under discussion will have effects on the level and distribution of Social Security benefits and taxes that are by now pretty well understood.

As for the future of Social Security, what is now required is for elected officials to choose among the alternative policies that will restore financial balance to the system. The current Social Security system will generate enough revenue to pay about three-quarters of the benefits that have been promised. Although the Social Security Trust Fund will allow the government to continue to pay promised benefits for another couple of decades, the Trust Fund consists of government bonds. When the government cashes in those bonds to finance the shortfall between promised benefits and payroll taxes, they must pay for them either by increasing taxes or by borrowing.