Former U.S. Senator Judd Gregg has been named the inaugural Dartmouth Distinguished Fellow, the Office of the Provost has announced. Gregg, who also represented his native state of New Hampshire as governor and U.S. congressman, will be a fellow for an initial appointment of three years. 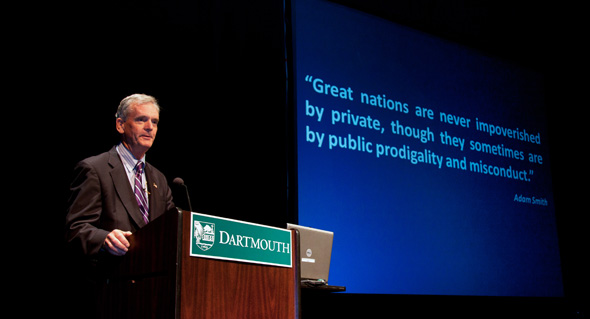 Judd Gregg, who served as chairman of the Senate Committee on the Budget, speaks at the opening “Leading Voices” lecture last year. (photo by Joseph Mehling ’69)

On campus, Gregg will interact with students, lecture and participate in classes, and be available to advise students working on thesis and independent research projects as schedules allow. He will have an office in Baker-Berry Library.

“I am greatly honored to be named as Dartmouth’s first Distinguished Fellow,” says Gregg. “Kathy and I have had a wonderful relationship with Dartmouth over the years at many levels, including, most importantly, having all of our children graduate from Dartmouth. We certainly look forward to this new opportunity to participate in the Dartmouth community and especially to interact with the students regarding issues of national governance and history.  It will be a wonderful new experience for us.”

Gregg is married to Kathleen MacLellan Gregg and the couple have three children, Molly ’00, Sarah ’02, and Joshua ’06. Gregg resides in Rye Beach, N.H.

Gregg has dedicated three decades of public service to New Hampshire and the nation. He served as United States Congressman from 1981-1988, as governor of New Hampshire from 1989-1993, and as United States Senator from 1993-2011. In the Senate, the Nashua native was chairman for the Committee on Health, Education, Labor and Pensions, and for the Committee on the Budget.

On September 17, Constitution Day, Gregg will deliver a speech, “The Role of the Senate and the Coming Fiscal Crisis,” sponsored by the Nelson A. Rockefeller Center at 4:30 p.m. in Silsby 028. There will be further opportunities for lectures, panel discussions, and workshops throughout Gregg’s fellowship.

Gregg has had a strong relationship with Dartmouth for years.

In 2006, he was awarded an honorary doctorate. In 2011, he delivered the opening lecture for the “Leading Voices in Politics and Policy” series. As a senator, he supported the founding at Dartmouth of the Institute for Information Infrastructure Protection and the Institute for Security, Technology, and Society, helping both Dartmouth organizations becoming leading authorities on cyberspace and cyber security.

“We are delighted to continue our longstanding relationship with Senator Gregg,” says Interim Provost Martin Wybourne. “Through his support of academic programs, his lectures on campus, and as the father of three alumni, Judd Gregg has played a valuable and visible role on campus. This makes it especially fitting and exciting to welcome Judd as the inaugural Dartmouth Distinguished Fellow.”