At the September 10 Convocation, President Carol L. Folt encouraged the Class of 2016 to “meet the future here at Dartmouth” by engaging in research, creating new knowledge and art, and working collaboratively.

“By working together over many generations, humans have created the knowledge from which new tools and technologies have emerged,” Folt said at the ceremony marking the beginning of Dartmouth’s 243rd year. “The great masterpieces created by the human mind and hand have not been produced in a vacuum. They have arisen and have meaning only in our cultural context. They are built upon our interactions—the sharing of ideas, philosophies, science, technology, humanities, and the arts. Although we may sometimes like to think that as individuals we succeed entirely on our own steam, all our creations and legacies are fundamentally collaborative.”

As Folt noted in her address to the crowd of 2,100 in Leede Arena, she had met the Class of 2016 on the previous day in her Parkhurst office, shaking hands and greeting each member of the class during Matriculation. She congratulated the students on “earning your seat” at Dartmouth, adding, “But do not get used to sitting down! You have come here to stand up for what you believe in—to learn how to how to think critically, to grow beyond what you have imagined, and to share the fruits of that growth with a wider world.”

Convocation speaker Ricki Stern ’87, an award-winning documentary filmmaker, also urged the Class of 2016 to embrace the arts at Dartmouth. “You are the first class to experience four years with a new (Black Family) Visual Arts Center and a college rededicated to excellence in the arts—embodied in Dartmouth’s decision to make this year the ‘Year Of The Arts,’ ” said Stern, who collaborates with fellow writer, director, and producer Anne Sundberg ’90, her business partner in Break Thru Films. “My great hope is you will incorporate the arts in whatever you study, and use art to tell your story.”

She also advised students to not fear failure, and spoke of the challenges she often faces as a filmmaker. In particular, Stern cited a boxing documentary in which their “real-life Rocky” proved not to be a champ, thus changing the story’s narrative three years into filming, and the 13 years she, Sundberg, and cinematographer William Rexer ’86 spent making their breakthrough HBO film, The Trials of Darryl Hunt. 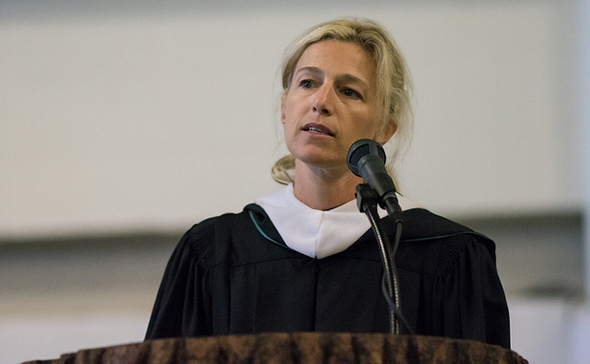 “We were inexperienced, discouraged at times, but we pushed blindly ahead not knowing where we would end up because we were inspired to tell Darryl’s story of injustice. I learned sometimes in life, as in art, it is the doing, the risk-taking that leads to the unforeseen reward,” said Stern, whose latest film, Knuckleball!, premieres September 18 and will be screened on campus October 27 at the new Loew Auditorium in the Visual Arts Center.

Student Body President Suril Kantaria ’13, also spoke, challenging the Class of 2016 to “harness whatever your passion may be” and to “leave your mark on Dartmouth.” A double major in economics and government from South Glastonbury, Conn., Kantaria said that creating a peer-mentoring program for first-year students “allowed me to invest myself in this institution.” 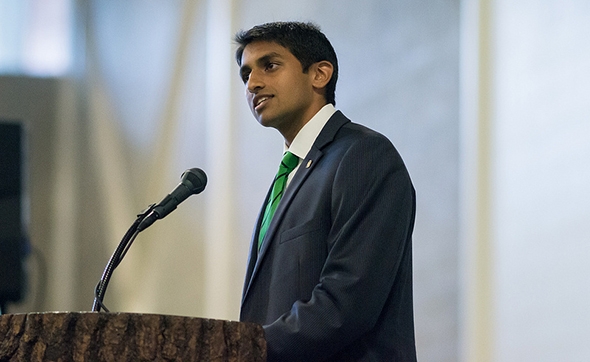 Reminding the students that they have only 1,371 days until commencement, Kantaria ended, “Class of 2016, the greatest debt you will carry with you after Dartmouth is not a financial one—it is the burden of making something of your education that benefits our world. As you overcome failures and find your path through Dartmouth into the limitless chaos of our world, let the weight of this heavy burden guide you as it has guided men and women before you.”

Dean of the College Charlotte Johnson presided over the ceremony, welcoming students, faculty, staff, and alumni attendees. The Dartmouth Glee Club and Gospel Choir performed together during the event, leading the crowd in the singing of “America the Beautiful” and Dartmouth’s “Alma Mater.”