Five postdoctoral scholars, the inaugural International Security and U.S. Foreign Policy Fellows, will be in residence at Dartmouth through June. The two-year pilot program, sponsored by The John Sloan Dickey Center for International Understanding and the Dean of the Faculty, provides resources for the fellows to conduct research, work on books and articles, and interact with faculty and students.

“These five Fellows will enrich the intellectual life of our community,” says Dean of the Faculty Michael Mastanduno. “It’s my privilege to welcome them to Dartmouth.”

Some scholars arrived in August and others in September; they are all now on campus with offices in the Dickey Center.

“The new program is a great opportunity to introduce dynamic young scholars to our community, help them build successful careers, and create a broad network of scholars and policy makers that run through Dartmouth,” says Christianne Hardy Wohlforth, acting director of the Dickey Center. 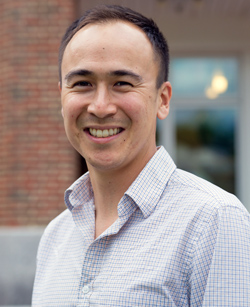 Michael Beckley earned his PhD from Columbia University; following his fellowship at Dartmouth he will work as assistant professor of political science at Tufts University. (photo by Eli Burak’00)

Michael Beckley received his PhD from Columbia University; his research centers on the sustainability of the U.S. global role in light of China’s rise to prominence. He plans to use his time at Dartmouth to work closely with faculty as he turns his dissertation into a book.

“The basic question I ask in my book is: Is unipolarity sustainable?” says Beckley. “The Dickey postdoc will help because several of the leading scholars in my area are at Dartmouth. I can’t think of a better place for me to be, given the research interests and experience of the faculty.”

Beckley also hopes to write articles during his time on campus. He will work as an assistant professor of political science at Tufts University following his fellowship at Dartmouth. 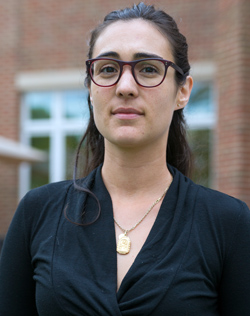 Rosella Cappella earned her PhD from the University of Pennsylvania, and next fall will work as assistant professor in Boston University’s Department of Political Science. (photo by Eli Burak ’00)

Rosella Cappella earned her PhD from the University of Pennsylvania and will join Boston University’s department of political science as an assistant professor in the fall of 2013. Her research focuses on how states fund war.

Cappella plans to spend her time at Dartmouth making her dissertation, “The Political Economy of War Finance,” into a book manuscript, and further her research on the relationship between economic inflation and warfare. She is eager to interact with the other fellows, students, and faculty.

“I think the quality of my work will improve tremendously by the conversations and sharing of work with my peers at Dartmouth,” says Cappella. 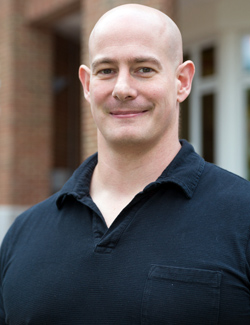 Austin Long is an assistant professor at Columbia University; his research focuses on military education and counterinsurgency. (photo by Eli Burak ’00)

Austin Long is an assistant professor at the School of International and Public Affairs at Columbia University. He specializes in the study of military education and counterinsurgency.

“My research examines the origins of professional military education in the British Army, the U.S. Army, and the U.S. Marine Corps, and how the culture that emerges from those origins permeates the organizations and shapes how they conduct counterinsurgency,” says Long.

He is looking forward to the intellectual atmosphere at Dartmouth.

“The fellowship will give me an opportunity to fill in gaps in the existing empirical elements of the cases I examine as well as a chance to get advice and feedback on the theoretical elements from Dartmouth’s outstanding faculty,” Long says.

After the fellowship, Long plans to conduct research in Afghanistan for the summer and return to Columbia next fall. 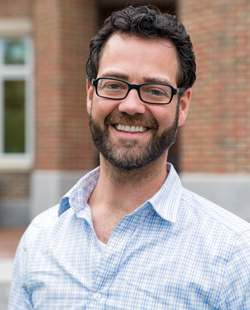 Trygve Throntveit earned his PhD from Harvard University, where he studied American intellectual and political history and international relations from 1880 to 1920. (photo by Eli Burak ’00)

Trygve Throntveit received his PhD from Harvard University, where he studied American intellectual and political history and international relations from 1880 to 1920, focusing on the influence of Woodrow Wilson and William James.

At Dartmouth, Throntveit will be working on his latest book project, which analyzes and rethinks Woodrow Wilson’s international influence. He is most eager to have time free from teaching— “Time to write; time to have conversations with people trained in the disciplines I’m trying to engage in my research,” he says.

Throntveit was recently featured by PBS NewsHour in a segment in which he discussed an early campaign video by Woodrow Wilson. 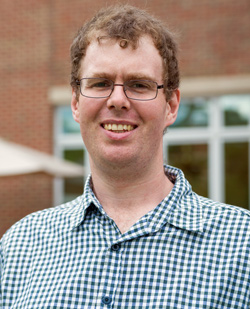 Matthew Trudgen’s scholarship centers on U.S. air and missile defense systems from the late 1940s through the Cold War. (photo by Eli Burak ’00)

Matthew Trudgen earned his PhD in history from Queen’s University in Canada, where he wrote his dissertation, “The Search for Continental Security: The Development of a North American Air Defense System 1949-1956.”

“My research examines the place of air and missile defense in U.S. strategy from the late-1940s to the end of the Cold War,” says Trudgen. “This postdoctoral fellowship will provide an excellent environment for me to conduct this research project.

While on campus, Trudgen will research strategic defense in U.S. security policy since World War II, particularly since the terrorist attacks of September 11, 2001.

“I am looking forward to being on a smaller university campus and to taking advantage of what it has to offer,” he says.

Trudgen hopes to continue a career in academia or to work in the government following his fellowship at Dartmouth.