From the midst of grassy fields to the peaked roofs of farmhouses and flat roofs of commercial buildings, photovoltaic (PV) installations are advancing over the landscape. Although solar power accounts for less than 1 percent of the country’s energy production, photovoltaics are expanding globally, driving the price of solar power down to a level that many people never thought possible. Optimistic predictions place solar on the threshold of being competitive with other sources of energy. 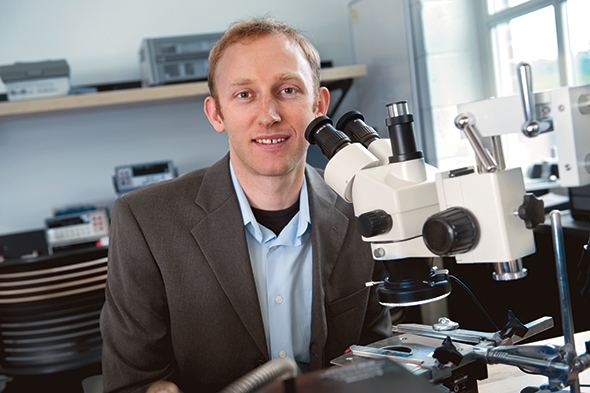 Jason Stauth is an assistant professor of engineering at the Thayer School of Engineering. He says, “In 2003, there was not nearly the same focus on energy as there is now. Cut to years later, there’s a boom in energy and everyone is working in it. Power electronics is very important in reducing the amount of energy we use.” (photo by John Sherman/Thayer School of Engineering at Dartmouth)

Working toward that end, Thayer School of Engineering professors Charles Sullivan and Jason Stauth, Thayer ’00, are developing aspects of solar power that are hidden to most people: power electronics.

Photovoltaic installations consist of multiple solar panels, each of which contains strings of solar cells—photo diodes that convert photons into electrons. But you have to do something to the energy that is gathered on your rooftop to make it useful. After all, you can’t plug your toaster into a solar cell and get breakfast. That’s where power electronics comes into play.

“Power electronics is the glue that holds together all the different parts of an energy system,” says Sullivan. “It’s what interfaces between the solar panel and the grid, between the grid and the device that uses energy.”