On the job: Having worked 34 years in construction and engineering design, Joe Broemel knows the goal for any project is to finish it on schedule and under budget. He takes that message to heart in daily life, too, while riding a bus on the commute between his home in Springfield, Vt., and Hanover. Thanks to the bus, Broemel saves money and is almost always on time. 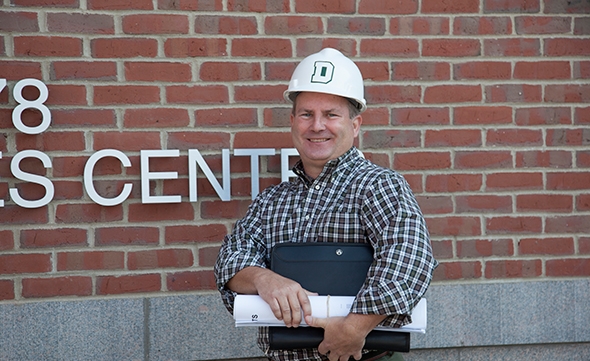 During his 10 years at Dartmouth, Joseph Broemel has overseen a variety of projects, including the building of The Class of 1978 Life Sciences Center. (photo by Corinne Arndt Girouard)

“It was the chance, and challenge, to work on new and different types of projects that drew me to the College,” says Broemel.

He has overseen the construction of The Class of 1978 Life Sciences Center, Red Rolfe Field at Biondi Park, Chase Field, and several medical school projects. 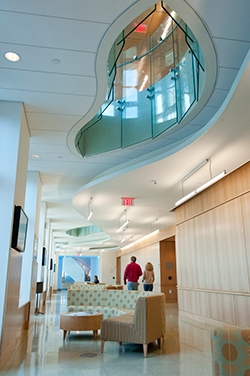 Dartmouth sets high standards for new facilities, Broemel says, and each has its own distinct goals. One aim for The Class of 1978 Life Sciences Center, for example, was to earn the prestigious LEED (Leadership in Energy and Environmental Design) certification from the U.S. Green Building Council (USGBC). In March, the building earned Platinum LEED certification, the USGBC’s highest level of recognition for sustainable building practices. A goal for the field hockey field was to recycle water used in their sprinkling system.

Broemel enjoys working on ambitious projects and taking on each fresh set of objectives.

“The best thing about managing construction projects at Dartmouth is that we are not typically just trying to do a good, average project,” says Broemel, citing the new baseball field, which is considered one of the best collegiate stadiums in the Northeast. “Dartmouth has traditionally committed the resources to do the job right and provide a facility that will be at the top of its class.”

His favorite part of his job is turning over a successful project to a department’s staff or athletic team, Broemel says, and seeing their excitement as they use their new facility.

Broemel’s typical day consists of collaboration with administrators, contractors, architects, engineers, and the Town of Hanover, among others, as he works on projects at various stages of construction. Whether the undertakings are in the first stage of design or the last phase of construction, they all have one thing in common.

“Any project has its challenges,” Broemel says.

Riding the bus: While these projects always present a few surprises or obstacles, Broemel is never worried about how he will get to campus.

Since starting work for Dartmouth, he has logged over 180,000 miles on the Connecticut River Transit bus that runs on Interstate 91 between Springfield and Hanover. He says he has saved countless dollars on gas, car maintenance, and parking on his 80-mile round-trip commute.

The bus runs on time, even in winter.

“I can only recall a handful of times in nine years that the bus has been a bit late, even on bad-weather days,” says Broemel.

Broemel spends the commute listening to music, reading, or talking with other riders, many of whom consistently make the same trip together.

“You get to know [other riders] quite well and can socialize during the trip,” Broemel says. “Some days I have laughed so hard I couldn’t see straight.”

And for all those miles he saves on his car during the workweek, Broemel puts some back on during his free time. “I like to jump in the car and take day trips through New England,” he says, “with no particular agenda in mind other than a basic destination.”