Kevork Awakimian is one of five students who made the journey from the American University of Kuwait (AUK) to Hanover this summer as part of the Dartmouth College–AUK Program internship program. “This internship is the best experience that I have had in my life,” says Awakimian. 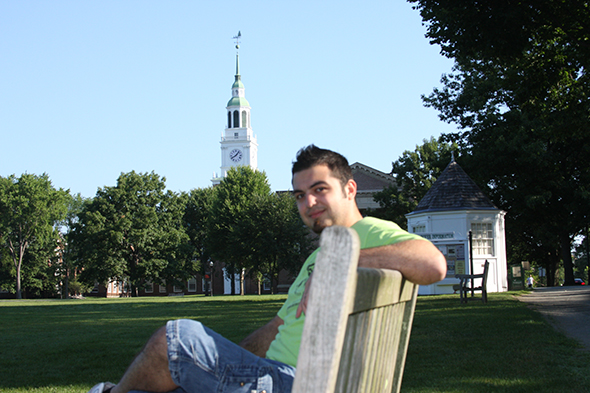 During his time at Dartmouth, Kevork Awakimian, a management major with a minor in international relations at AUK, worked with the Rassias Center for World Languages. (photo by Chrissy Pearson)

Two of this summer’s AUK interns, Yousef Abdul-Husain and Helene Georges El Neaman, had hands-on experience working in the Hood Museum of Art, the Office of Public Affairs, and the Media Production Group. “We got a taste of everything,” says El Neaman, a double major in graphic design and computer engineering at AUK.  “A taste of curating, of design, and of videography, all in one month.” 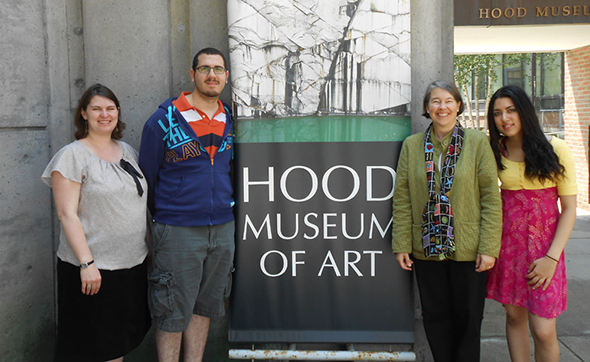 As part of their work with both the Office of Public Affairs and the Media Production Group, Abdul-Husain and El Neaman produced the video below, capturing part of their Dartmouth experience this summer. For Abdul-Husain, a communications major, the opportunity to work in video production—a hobby of his—was one of the reasons he applied for the internship. “That’s what sealed the deal,” he says. 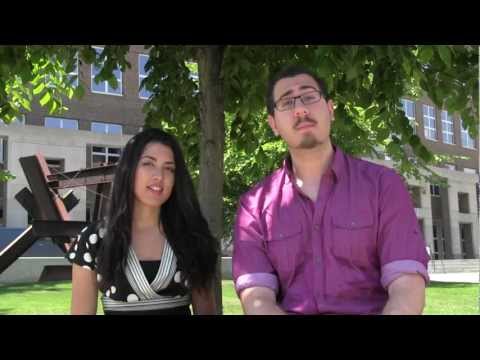 A management major with a minor in international relations, Awakimian worked with the Rassias Center for World Languages during his time at Dartmouth, assisting one of the program’s Arabic master teachers. Awakimian was thrilled with the achievements of his students, most of whom were familiar with reading and translating Arabic, but not with speaking it.

“The first few days, they were talking like 2-year-olds, like a person who had just started talking,” says Awakimian. “On the last day, one of my students, without preparing, went on stage and started speaking Arabic. This person could not speak a full sentence when he first came here, and now he’s speaking Arabic.”

While he is proud of his students’ achievements, Awakimian is also grateful for the impact the professional and cultural experience at Dartmouth has had on his own life. “It was a challenge and improved my self confidence,” he says.

The internship class also included Wadhah Al-Dalama and Eman Karam, who participated in the two-week Secure Information Systems and Mentoring Program (SISMAT) offered through Dartmouth’s Institute for Security, Technology, and Society. The two-week program trains students in cyber security tools. Both women majored in information systems at AUK and participated in the Microsoft Imagine Cup finals in Kuwait. 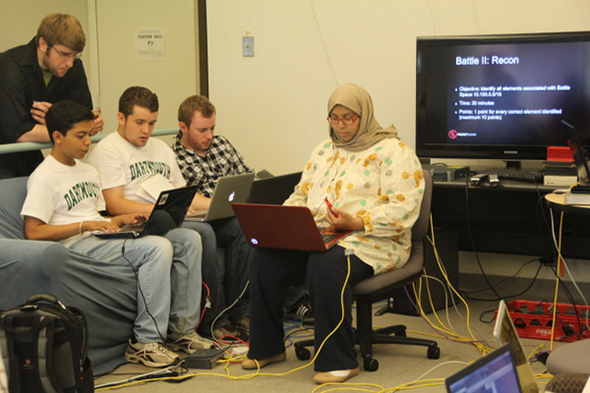 AUK’s participation in SISMAT grew from another aspect of Dartmouth’s relationship with AUK—the Faculty Fellows Program. Each year, a faculty member from AUK can come to Dartmouth to advance his or her scholarship. In 2010, AUK Associate Professor of Computer Science Amir Zeid worked with George Cybenko, the Dorothy and Walter Gramm Professor of Engineering, in a range of areas, including gender studies and computer science.

Speaking with Denise Anthony, associate professor of sociology, Zeid observed that roughly 40 percent of computer science majors at AUK were women. In an attempt to find out why more women in Kuwait than in the United States major in this field, Zeid, Anthony, and the Dartmouth–AUK Office arranged a series of web conferences between female computer science majors at Dartmouth and at AUK. 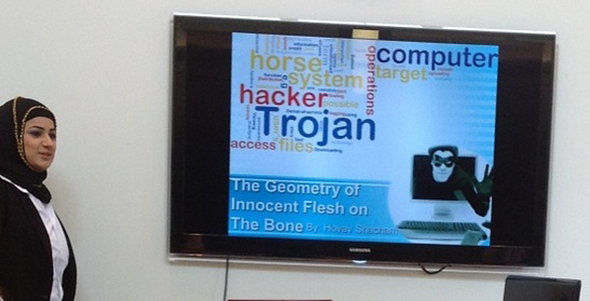 Eman Karam explains one of her projects during a SISMAT presentation. (photo by Wadhah Al-Dalama)

Zeid continues to work with applicants to the program, with his faculty colleague Mohammad Awad, who spent summer 2011 at Dartmouth as an AUK Faculty Fellow.

“These collaborative programs with emerging universities are tremendously important in the sense that they give us an on-the-ground view of what is emerging, what is important, and what subject matters are most meaningful in certain parts of the world,” says Laurel Stavis, former executive director of the Dartmouth–AUK Program, who recently transitioned to a new position at Dartmouth as assistant provost for international initiatives.

The impact of the Dartmouth–AUK Program stretched across campus this summer, from the editing room of the Media Production Group to the classrooms of the Rassias Center to the computer labs of the SISMAT program. “I think for everybody involved it has been a very significant experience,” says Dale Eickelman, the Ralph and Richard Lazarus Professor of Anthropology and Human Relations and the relationship coordinator for the Dartmouth–AUK Program.

“Dartmouth is a life changer,” says El Neaman. “It has helped me set goals and given me a bigger picture of the world.”

Awakimian plans to encourage his peers at AUK to apply for the internship program. “It’s hard to explain the feeling that you get, the experience you get,” he says. “I can’t picture it for them, but they have to come see it.”