The history department will host “Military Service and National Obligation: A Symposium,” featuring lectures and a roundtable discussion about the history of armed service, on October 5 and 6.

The symposium will explore themes from President Emeritus James Wright’s most recent book, Those Who Have Borne the Battle: A History of America’s Wars and Those Who Fought Them (PublicAffairs, a member of Perseus Books 2012). Dartmouth faculty members from the history, English, geography, government, and women and gender studies departments will lecture and present papers on ancient to contemporary military history, both in America and abroad. 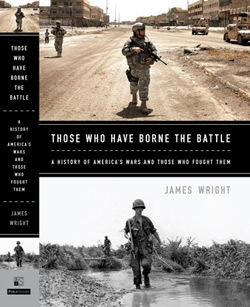 “I am very pleased to participate in the symposium on a topic of such importance and with such a distinguished panel,” says Wright. “We need to talk about and understand a subject that is too often ignored—the nature of war and our long-term obligation to those who volunteer to fight our wars, an increasingly small and unrepresentative sector of our population.”

The October 5 roundtable is moderated by Associate Professor of Government Benjamin Valentino and will include retired U.S. Army Lieutenant Colonel John Nagl. Nagl is the Minerva Chair at the U.S. Naval Academy and has also served as president of the Center for a New American Security. Nagl called Wright’s work “a marvelous and important book” that is “marked by empathy as well as scholarship.”

Wright, a former Marine, served as the 16th president in the Wheelock Succession, from 1998 to 2009. His extensive work with veterans has been featured by The New York Times and ABC News, and recognized by the U.S. Marine Corps. 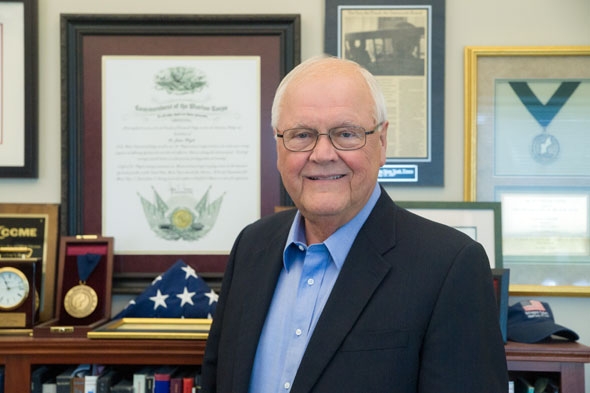 “We need to talk about and understand a subject that is too often ignored—the nature of war and our long-term obligation to those who volunteer to fight our wars, an increasingly small and unrepresentative sector of our population,” says James Wright, Dartmouth president emeritus. (photo courtesy of James Wright)

“This symposium will give the Dartmouth community an opportunity to reflect on the evolving meaning of military service in the United States,” says Valentino. “President Wright’s book shows us how America’s past still influences our attitudes about the sacrifices that war demands of our soldiers and the rest of society today. We will be exploring whether civilian society has done enough to share the burden of war, and to care for those we ask to fight them.”

The event is sponsored by the Nachman Fund in History, The Leslie Center for the Humanities, and the Nelson A. Rockefeller Center. October 5 events will take place in Filene Auditorium and the October 6 program will be held in L02 Carson Hall.

How Many Americans Support Political Violence?

Description
An article about the question of support for political violence in the U.S. a year after the Jan. 6 insurrection cites a paper co-authored by government professor Sean Westwood that says documented support for such violence is “illusory.”
Logo
Image