Dartmouth’s first endowed chair, the John Phillips Chair in Divinity, was established in 1787. Since then, endowed chairs have helped keep Dartmouth at the forefront of higher education by allocating resources to faculty, who return the gift of learning to their students.

Two newly endowed chairs in the arts and sciences have been established with inaugural faculty appointments. F. Jon Kull ’88, professor of chemistry and the dean of Graduate Studies, has been named to the Rodgers Professorship, and Yusaku Horiuchi, associate professor of government, has been appointed to the Mitsui Professorship.

“Endowed chairs are prized in the academy because they represent recognition of our highest ideals: independence of thought, cutting-edge research, and the ability to inspire our students,” says Dean of the Faculty Michael Mastanduno. “It’s my privilege to congratulate Professors Kull and Horiuchi on their appointments, along with the other members of the Arts and Sciences faculty who now hold these prestigious chairs.”

In addition, 12 faculty members have been appointed to existing endowed chairs. 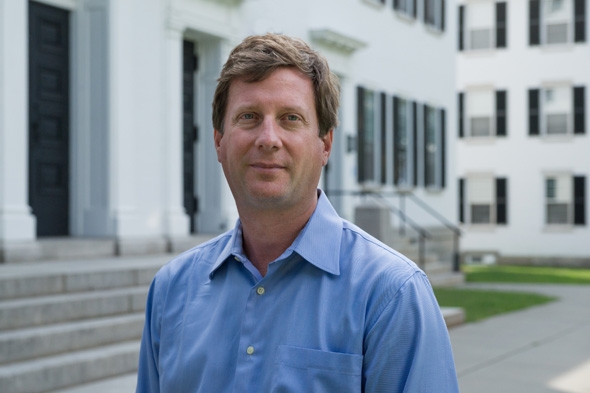 F. Jon Kull, an internationally recognized structural biologist, has been named the inaugural holder of the Rodgers Professorship. (photo by Eli Burak ’00)

When F. Jon Kull arrived at Dartmouth as a first-year student in 1984, he was unsure about what he would study, but never imagined following in his father’s footsteps.

“My dad was a biochemist,” he says. “I really thought I would end up majoring in some other area of science.”

When Kull started taking classes in the sciences, he found he particularly enjoyed chemistry.

“As I progressed through chemistry, I also took a lot of biology classes,” Kull says. “I realized that what I found most interesting was biology at the chemical level, and it turns out that that is biochemistry. I went even farther than that, into structural biology, which is really at the atomic level: understanding how proteins work, and how enzymes work, and how biochemical reactions occur in the body.”

Kull double majored in chemistry and biology, and worked with Professor Dean Wilcox on a research paper about metal binding proteins. The paper was eventually published, with Kull as first author, in the prestigious Journal of the American Chemical Society (JACS). When Kull applied to graduate schools, many program administrators were taken aback that he had published in JACS as an undergraduate.

“I remember when I was interviewing for graduate schools, some professor I interviewed with said, ‘You have a JACS paper? I’ve never been able to get a paper published in JACS,’ and this is a guy with 200 publications.”

Kull believes his success with that first paper exemplifies Dartmouth’s dedication to both teaching and research—qualities he hopes to strengthen as a professor. As an undergraduate, Kull was active with the Dartmouth Outing Club and remains involved as a faculty adviser. He enjoys interacting with students both inside and outside the classroom.

“It is a wonderful, unexpected honor,” Kull says. 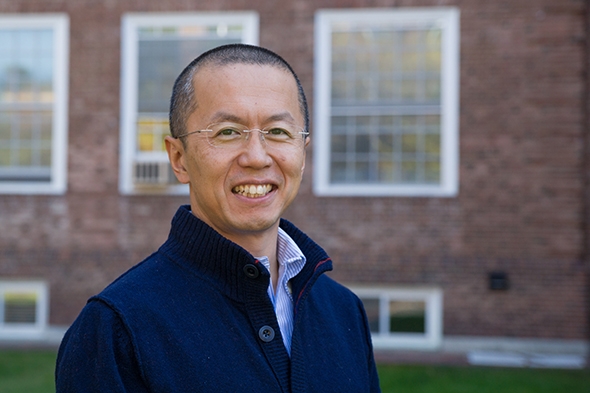 Yusaku Horiuchi, an expert on Japanese politics, will teach in the government department as the inaugural holder of the Mitsui Professorship. (photo by Eli Burak ’00)

Yusaku Horiuchi, who comes to Dartmouth from the Australia National University, has been named the inaugural holder of the Mitsui Professorship.

Horiuchi’s scholarship focuses on comparative politics, public opinion, and research methods. He frequently uses Japan as a case study to make theoretical and methodological contributions to political science. Having taught in Singapore and Australia, Horiuchi says his international experience has given him a new perspective on his native country.

“These experiences have provided me with opportunities to learn about politics and society in countries in the Asia Pacific and to look at Japan from numerous comparative viewpoints,” says Horiuchi.

Horiuchi, who received his PhD from MIT in 2001, is eager to teach in the United States, which he considers Japan’s most important strategic partner.

“I truly look forward to teaching a course on Japanese politics at Dartmouth College in order to help the future leaders of the U.S. and other nations improve the understandings of Japan,” Horiuchi says.

Horiuchi will serve as an associate professor of government. The Mitsui Professorship was established in 2011 by the Mitsui & Co., Ltd., for an Arts and Sciences faculty member whose teaching and scholarship focuses on modern Japan.

“It is my great honor to be selected as the inaugural Mitsui Chair of the Study of Japan at Dartmouth, which was established with the generous endowment from Mitsui & Co., Ltd.,” says Horiuchi. He says the honor inspires him “to be a better political scientist, a better teacher, and a better citizen diplomat.”

Stephon Alexander, associate professor of physics and astronomy, was appointed to the Ernest Everett Just 1907 Professorship of Natural Sciences.

Ada Cohen, professor of art history, was appointed to the Israel Evans Professorship in Oratory and Belles Lettres.

Lynn Higgins, professor of French and Italian, was named the Edward Tuck Professor of the French Language and Literature.

Michael Mastanduno, dean of the Faculty of Arts and Sciences, was re-appointed to the Nelson A. Rockefeller Professorship in Government.

Carl Pomerance was named to the John G. Kemeny Parents Professorship in Mathematics.

Barrett Rogers, professor of physics and astronomy, was named to the Pat and John Rosenwald Professorship.

Wen Xing, associate professor of Asian and Middle Eastern literature and languages, was appointed to the Robert 1932 and Barbara Black Professorship.

Silvia Spitta, professor of Spanish and Portuguese, was appointed to the Robert E. Maxwell 1923 Professor in Arts and Sciences.