Most people equate “gray matter” with the brain and its higher functions, such as sensation and perception, but this is only one part of the anatomical puzzle inside our heads. Another cerebral component is the white matter, which makes up about half the brain by volume and serves as the communications network.

The gray matter, with its densely packed nerve cell bodies, does the thinking, the computing, the decision-making. But projecting from these cell bodies are the axons—the network cables. They constitute the white matter. Its color derives from myelin—a fat that wraps around the axons, acting like insulation. 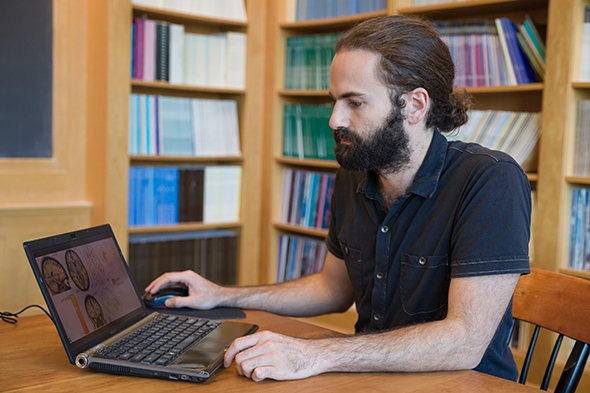 Alex Schlegel, first author on a paper in the August 2012 Journal of Cognitive Neuroscience, has been using the white matter as a landscape on which to study brain function. An important result of the research is showing that you can indeed “teach old dogs new tricks.” The brain you have as an adult is not necessarily the brain you are always going to have. It can still change, even for the better.

“This work is contributing to a new understanding that the brain stays this plastic organ throughout your life, capable of change,” Schlegel says. “Knowing what actually happens in the organization of the brain when you are learning has implications for the development of new models of learning as well as potential interventions in cases of stroke and brain damage.”

Schlegel is a graduate student working under Peter Tse, an associate professor of psychological and brain sciences and a co-author on the paper. “This study was Peter’s idea,” Schlegel says. “He wanted to know if we could see white matter change as a result of a long-term learning process. Chinese seemed to him like the most intensive learning experience he could think of.”

Twenty-seven Dartmouth students were enrolled in a nine-month Chinese language course between 2007 and 2009, enabling Schlegel to study their white matter in action. While many neuroscientists use magnetic resonance imaging (MRI) in brain studies, Schlegel turned to a new MRI technology, called diffusion tensor imaging (DTI). He used DTI to measure the diffusion of water in axons, tracking the communication pathways in the brain. Restrictions in this diffusion can indicate that more myelin has wrapped around an axon.

“An increase in myelination tells us that axons are being used more, transmitting messages between processing areas,” Schlegel says. “It means there is an active process under way.”

Their data suggest that white matter myelination is precisely what was seen among the language students. There is a structural change that goes along with this learning process. While some studies have shown that changes in white matter occurred with learning, these observations were made in simple skill learning and strictly on a “before and after” basis.

“This was the first study looking at a really complex, long-term learning process over time, actually looking at changes in individuals as they learn a task,” says Schlegel. “You have a much stronger causal argument when you can do that.”

The work demonstrates that significant changes are occurring in adults who are learning. The structure of their brains undergoes change.

“This flies in the face of all these traditional views that all structural development happens in infancy, early in childhood,” Schlegel says. “Now that we actually do have tools to watch a brain change, we are discovering that in many cases the brain can be just as malleable as an adult as it is when you are a child or an adolescent.”