The Orozco Room in Baker-Berry Library, which houses one of Dartmouth’s greatest treasures, José Clemente Orozco’s major mural cycle The Epic of American Civilization, has reopened after undergoing a three-and-a-half month renovation. A new lighting system has been installed that dramatically improves the display of the fresco masterpiece, and the ground-level reserve reading room, which was renamed the Orozco Room through the generosity of the Manton Foundation, has been transformed into a quieter, more intimate space for studying and viewing the murals. 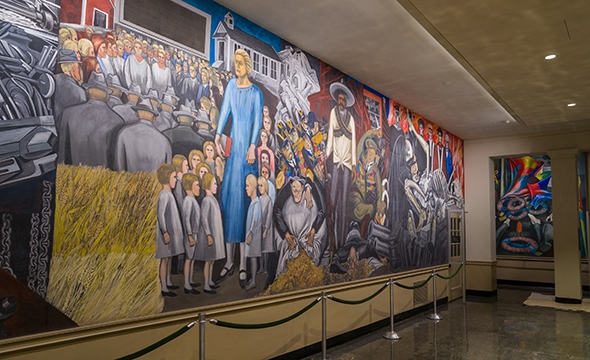 A new lighting system has been installed in the Orozco Room in Baker-Berry Library, improving the display of José Clemente Orozco’s “The Epic of American Civilization.” (photo by Eli Burakian ’00)

The renovation will be celebrated on October 5 with the Manton Foundation Orozco Lecture by Wellesley College Latin American art scholar Jay Oles, titled “Mexican Pyramids on American Walls: Revivals, Restorations, Reinventions.” The lecture will be held in the Hood Museum of Art Auditorium (formerly the Loew Auditorium beneath the Hood) at 5:30 p.m., followed by a reception in the Baker Library Main Hall at 6:30 p.m.

Dean of Libraries Jeffrey Horrell is enthusiastic about the changes to the Orozco Room. “Because of the Manton Foundation,” he says, “this transformation of the lighting of the Orozco mural cycle, as well as the refurbished reading tables, new reading lights, and comfortable seating in the Orozco Room, assures that visitors and students alike will have an inviting and engaging experience. Generations of Dartmouth students have been challenged and inspired by these extraordinary and powerful images. This tradition will continue.”

Orozco (1883-1949) served as Dartmouth’s second artist-in-residence at a time of intense growth and activity in the institution’s art department. Art history professors Artemas Packard and Churchill Lathrop brought the prominent Mexican artist to campus to teach the art of fresco to students. During that residency, the idea for the commission of a mural was proposed, and later supported by then-Dartmouth President Ernest Martin Hopkins. Orozco created The Epic of American Civilization between 1932 and 1934.

The fresco represents the most ambitious public mural undertaken by the renowned Mexican artist during his years in the United States. Despite its “epic” title, Orozco conceived of the mural not as a narrative but as a work structured around an American idea, specifically a representation of a continent characterized by the duality of indigenous and European historical experiences.

“The importance of this mural cycle cannot be overestimated,” says Hood Museum of Art Director Michael Taylor. “This fresco by Orozco represents one of the most significant works of art created during the 1930s in the United States. For the first time, the mural’s striking range of colors and impressive graphic forms will be illuminated with clear, balanced lighting.”

Orozco used the reading room’s symmetrical west and east wings—which he devoted to pre-Hispanic and post-conquest civilizations, respectively—to create historical and cross-cultural parallels and to suggest the cyclical nature of human conflict, self-sacrifice, and regeneration.

Over the past few years, the Dartmouth Library and the Hood Museum of Art have worked together on the project to provide the new lighting design, replacing the decades-old fluorescent lights with a new, state-of-the-art system. A generous grant from the Manton Foundation made the project possible, and support from the Provost’s Office at Dartmouth allowed the library to install a new acoustical ceiling, two new seating areas, and new lamps and electrical outlets for the reading tables.

Anita Jorgensen Lighting Design of New York City was retained to design the new system. Working with Dartmouth Project Manager Laura Black, Jorgensen set up four lighting mockups, each using different types of light that could be employed in the design—halogen, fluorescent, LED, and fiber optic with a halogen source. The mockups were reviewed by the designer, Hood Museum of Art and Baker Library staff, and an engineer from Dartmouth’s Facilities, Operations, and Management Department.

All chose the LED source for its color rendering, color temperature, even distribution, and lack of UV light. As the design progressed, an acoustic ceiling material was incorporated into the dropped ceiling, which had been designed to provide a valance to conceal the mural lighting as well as to allow recessed lighting for general ambient illumination in the corridor. In addition, the windows were treated with a UV filtering film. The large library study tables were refinished and then appointed with custom designed table lamps with power receptacles in the bases. The library also replaced two study tables with soft seating furniture. 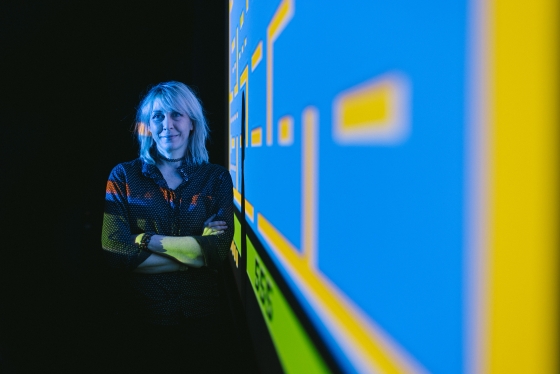 A Dozen Exhibits to Check Out Now Around New England

Description
The Hood Museum of Art’s exhibition Images of Disability—and the museum’s focus on showing “a diverse array of contemporary expression”—are highlighted in a round-up of regional museum offerings.
Logo
Image