About 30 people gathered on Homecoming Weekend for a surprise party to celebrate Dartmouth Professor John Rassias and the 1969 study abroad trip he led to Bourges, France. 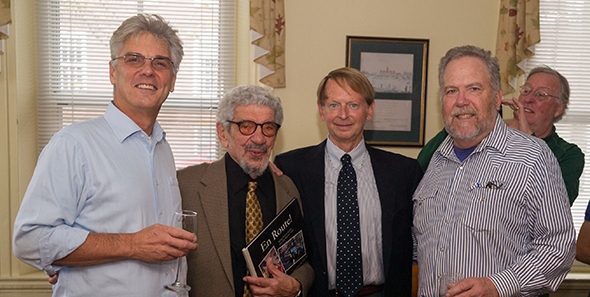 When Rassias, the developer of the renowned Rassias Method of learning languages and the William R. Kenan Professor, arrived at the event in Blunt Alumni Center, he appeared to be taken aback.

With a champagne flute in hand, Mickey Stuart ’71, who helped plan the celebration, toasted “our lovely, great friend.” A slideshow behind Stuart cycled through photographs from the trip.

“It is a great gift that you’ve given all of us,” said Stuart. “We’re here to honor you and thank you.” Stuart said he traveled to France knowing very little French, and finished the program feeling much more comfortable with the language.

The classmates presented Rassias with a book of photos and anecdotes from the term in Bourges. The introduction to the book reads, “Probably none of us anticipated how rewarding and even life transforming this term abroad with you would become.” Of the 27 students who went on the spring term trip, more than two dozen sent contributions for the book. The former students sent more than a thousand photographs, emails, and letters to the organizers of the book.

As the classmates took turns toasting, Tom Clemens ’71 told Rassias, “You started me on my way in the world. Every moment of my life has been influenced by you.”

Tom Loucks ’71, who worked to put the book together, gave a toast. “I hate to one-up anyone, but my host sister became my wife,” he said, referring to the French family he lived with in Bourges. Many of the former students’ family members were in attendance, as well as Rassias’ daughter, Helene Rassias-Miles, who serves as executive director of the Rassias Center. She said the gathering for her father “speaks so much to what he has done.”

The Rassias Method, which Rassias describes as “teaching heart to heart,” was developed for use by the Peace Corps, which began using it in 1965. Rassias is the founder and former director of Dartmouth’s Language Study Abroad programs.

“I’m overwhelmed by the fact that you all came back here,” said Rassias.