Beatboxer Performing on Campus This Week

Adam Matta, a beatboxer, is on campus this week—teaching a master class, meeting with student groups, and performing on Thursday, October 25, at the Hopkins Center’s Warner Bentley Theater at 7 and 9:30 p.m. 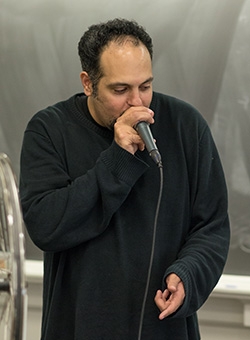 Adam Matta will perform at the Hopkins Center’s Warner Bentley Theater on Thursday, October 25 at 7 and 9:30 p.m. (photo by Eli Burakian ’00)

Using nothing more than a microphone, Matta creates musical sounds ranging from drum beats to brass instruments to a bass guitar. Beatboxing dates back to the 1980s, and is normally associated with rap and hip-hop music. Matta, however, has a diverse set of collaborators. He has performed with a cellist, orchestras, and a traditional folk group. Often, when he performs with other musicians, he produces a backbeat while they sing or play an instrument.

“Adam’s residency is particularly exciting for us because it brings together so many different types of music-making that goes on at Dartmouth, from the a cappella groups, to aspiring jazz musicians, to the Digital Music graduate students,” says Rebecca Bailey, publicity coordinator for the Hopkins Center. “Beatboxing is at once accessible and complex; anyone who has a mouth and larynx can do it, but Adam shows us just how far you can take it.”

Matta, who has appeared at Carnegie Hall and headlined the 2009 U.K. Human Beatbox Convention, says his genre of performing has gained respect among musicians, but still remains largely unknown among the wider public. To some people, “it’s still a novelty thing,” he says. 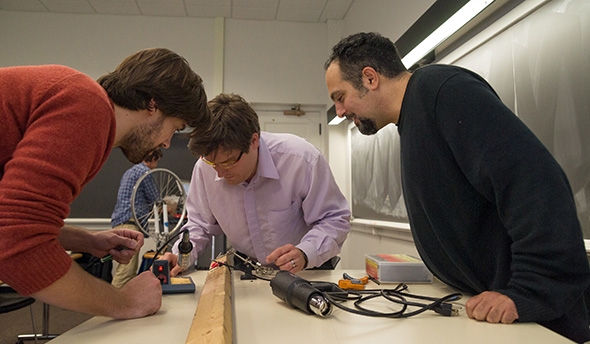 Matta beatboxed for years before ever performing for others.

“I just always did it for myself when I was a kid; I was always making beats under my breath—on the way to work, on the way to school,” he says. Some of Matta’s friends overheard him beatboxing and encouraged him to pursue his talent.

Matta believes that the versatility of beatboxing—since people can practice virtually anywhere, with no need to buy or carry an instrument or rent out studio space—will further the performance art. Currently, Matta says, there are about 10 to 15 beatboxers based in New York, where he lives and works, and around 50 to 60 professional beatboxers in the United States. He says an increased interest in a capella music in the United States has helped elevate beatboxing in recent years.

This week, Matta hopes to broaden Dartmouth students’ ideas about the capabilities of the human voice.

“The human voice is a powerful instrument,” he says. “I’m hoping that people can maybe see the voice happen in a context that they wouldn’t have thought of on their own.”