It’s not every day that you get cheered on by 10,000 spectators. But that’s the experience Alex Stein ’06 had as a coxswain for the U.S. rowing team, competing in the London 2012 Paralympics. Stein, an assistant director of athletic fundraising at Dartmouth, led the LTA Mixed Four boat to a sixth-place finish on September 2 at the international competition, in which 4,200 athletes with a wide range of disabilities competed over the course of 12 days. 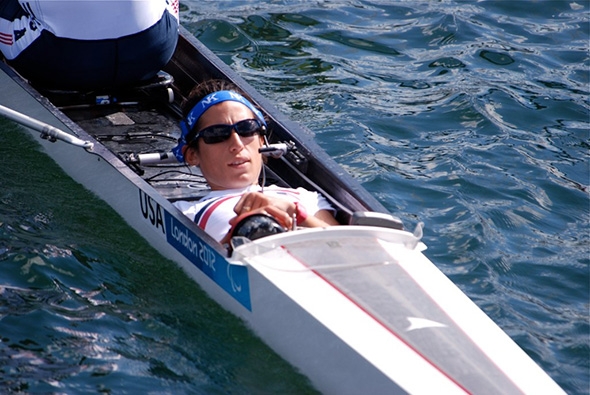 Alex Stein ’06 was a coxswain at the London 2012 Paralympics for the U.S. team’s LTA (Legs, Trunks, and Arms) Mixed Four boat. In a four-person shell, the coxswain is positioned in the bow with a direct line of sight to the finish line. (photo courtesy of USRowing)

“I remember being on the line, about to race, and hearing the official polling each country—‘Ireland, Belarus, Great Britain, Canada, France, United States!’ ” says Stein of her boat’s first race on Dorney Lake. “And for that race, in that moment, we were the United States! I was so incredibly proud.”

A member of the U.S. Paralympic team since 2011, the former Big Green coxswain is not disabled. According to Paralympics rules the coxswain need not have a disability.

A coxswain has a number of different roles in the boat. “Their primary job is to steer the boat and keep everyone safe,” says Stein. “Beyond that, as a coxswain, you are a coach in the boat. You are a strategist. You are the jockey or the quarterback. You are implementing the strategy and bringing the boat together.”

Stein’s boat, the LTA Mixed Four with coxswain, denotes that there are two women and two men in the boat rowing with the use of their legs, trunks, and arms. Two of the rowers in Stein’s boat were blind and two had a limited range of motion in their ankles and their arms. 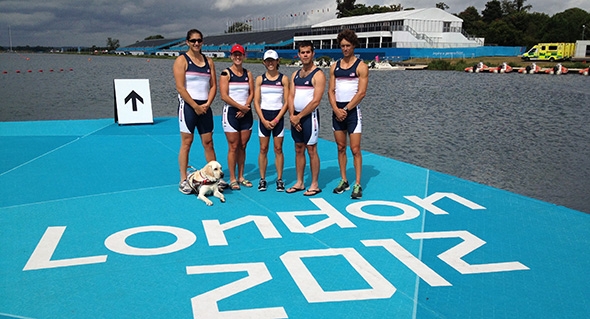 The Paralympic Games were founded in 1948 by German neurologist Sir Ludwig Guttmann, who organized a sports competition for injured World War II veterans. Today, the Paralympic Games are an international sporting competition for athletes with a range of physical disabilities. It’s held every four years, immediately following the Olympics. The 2012 Games were the most popular in history, breaking records for attendance, volunteer support, and ticket sales.

Stein trained with her boat mates nearly seven hours a day, six days a week, this past summer. Though the training was “absolutely grueling,” she continued working in her Dartmouth job, telecommuting from training sites in Virginia, California, New Jersey, and Pennsylvania.

“I am thankful that my job allowed me the flexibility I needed to train and compete at such a high level,” says Stein. “Wherever I went, I met with alumni all over the country to talk about our amazing Dartmouth athletic programs and to generate excitement about what these programs are doing for our student-athletes here in Hanover and beyond.”

Despite not competing in any World Cup races prior to the Paralympic Games, her boat finished second in both its heat and semifinal, and sixth in the final. “We are proud of what we accomplished in London,” she says. “But you know, you only get a shot at the Paralympic medal once every four years and it certainly leaves you hungry for more.”

On September 14, Stein attended a White House reception with President Obama, First Lady Michelle Obama, and Vice President Joe Biden for all of the U.S. Paralympians and Olympians. Sean Furey ’04, Erik Storck ’07, and Anthony Fahden ’08 were also in attendance. 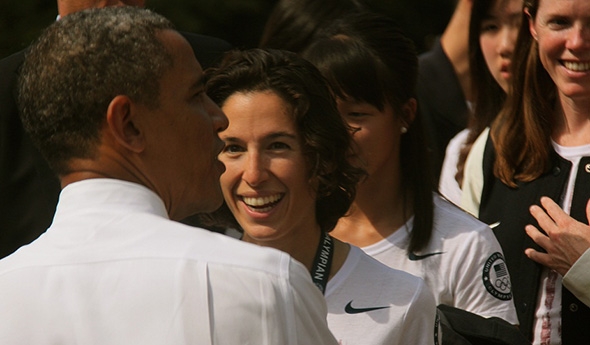 Stein is back in Hanover now, but hopes to participate next year in the World Rowing Championships, where she competed in 2011 as a member of the U.S. Paralympic team. “I’m so glad I discovered rowing at Dartmouth,” she says. “I think it is core to who I am.”