As Francesca Civano joins Dartmouth’s Department of Physics and Astronomy, she brings millions of seconds with her. Sounding like a time traveler carrying strange baggage, the new postdoctoral research associate has actually laid claim to 2.8 million seconds—more than 778 hours, or 32 days—to look back into deep time using the Chandra X-ray Observatory. 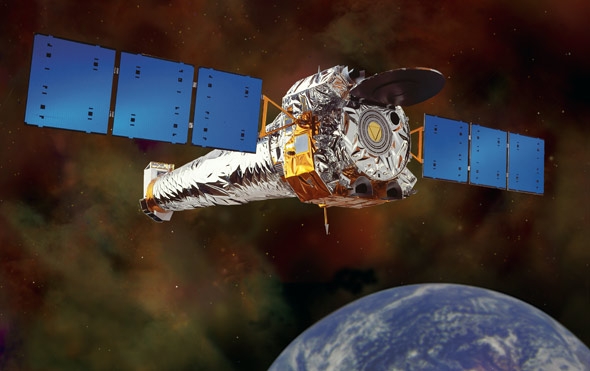 NASA’s Chandra X-ray Observatory is designed to detect X-ray emissions from very hot regions of the universe such as exploded stars, clusters of galaxies, and matter around black holes. (Photo courtesy of NASA/CXC/NGST)

Chandra is a telescope orbiting more than 86,000 miles above the Earth, focusing its eye on X-rays emitted by black holes a long time ago and far, far away, to paraphrase Star Wars. Characterizing observation time in millions of seconds is standard astronomical research terminology. Chandra is operationally hosted by the Smithsonian’s Astrophysical Observatory in Cambridge, Mass., Civano’s home base for the last five years. Her capture of observation time, the second largest block of Chandra time awarded in the telescope’s 14-year history, will enable her to study the cosmic evolution of black holes, their host galaxies and other X-ray sources. Civano’s allotted time on the telescope constitutes 15 percent of the total Chandra observing time for 2013.

Civano received her PhD from the University of Bologna in Italy in 2007. Before coming to the Upper Valley, she was a post-doctoral fellow at the Harvard-Smithsonian Center for Astrophysics, where she drew media attention for her discovery of a supermassive black hole being ejected from its home galaxy at a speed of several million miles per hour.

“I have been involved in a worldwide collaboration known as the Cosmic Evolution Survey, or COSMOS,” Civano says. “Started in 2004, it has involved all the major ground- and space-based telescopes covering the spectrum from X-ray to radio wavelengths. COSMOS studied the cosmic evolution and formation of galaxies and supermassive black holes and their environments in a specifically defined field outside of our own galaxy.”

Now, eight years after the beginning of the COSMOS program, other astronomers using other kinds of telescopes are coming onboard, with similarly large amounts of observation time, to conduct studies parallel to Civano’s. These amounts of time include 1,200 hours on the infrared Spitzer Space Telescope and 385 hours on the Karl G. Jansky Very Large Array radio telescope in New Mexico.

Civano’s 2.8-megasecond “COSMOS Legacy” survey represents a continuation of the precursor COSMOS survey, but exclusively in the X-ray zone. Civano will be hunting for quasars—high-energy, star-like objects that are among the oldest and most distant objects in the universe. She will be looking back to a time 1 or 2 billion years after the Big Bang, when the universe—now 13.7 billion years old—was still young.

“Observation will start in November (2012), depending on the visibility of the field in the sky from the Chandra satellite,” says Civano, “but most of the observations will be taken in the spring, because the telescope will then be better positioned.” COSMOS Legacy will continue the work Civano began in the early COSMOS survey, pushing further back in time and expanding our knowledge of how various celestial phenomena came to be.

“The data we will be getting in the future should be deeper and of better quality,” Civano says, citing technology upgrades such as the planned installation of a new camera on Hawaii’s Subaru telescope. “This new camera will be revolutionary. It will take breakthrough images comparable to the high resolution that we have now with Hubble, but much bigger.”