In June 2010, when Pilobolus staged the world premiere of its latest dance piece, Hapless Hooligan in “Still Moving,” in the Hopkins Center for the Arts’ Moore Theater, Jeffrey Ruoff’s cameras were rolling.

The associate professor of film and media studies filmed for 11 days and then spent the next two years producing a documentary about the internationally renowned dance theater company, which traces its origins to a 1971 Dartmouth dance class. The result, Still Moving: Pilobolus at Forty, will have its own world premiere at the Mill Valley Film Festival in California on Saturday, October 6, and will screen at Dartmouth on October 11 and 13. (Both shows are sold out, but additional screenings may be added.)

“The return to Hanover by the company, 40 years after its founding, formed the basis for my film,” says Ruoff, who interviewed Art Spiegelman, the Pulitzer Prize-winning graphic novelist who collaborated with Pilobolus on Hapless Hooligan for the film. Also included in the 38-minute documentary is footage of Pilobolus’ workshop with members of the Dartmouth community and other Upper Valley residents.

“Through biological metaphors and a holistic emphasis on the group, the documentary explores Pilobolus’ unique structure and style and how these characteristics have allowed the company to evolve successfully over the past four decades, supplementing its signature movement vocabulary with innovative outside collaborations,” Ruoff continues. “The film also speaks of Pilobolus’ fundamental values—of community, creativity, and cooperation.”

Pilobolus’ Robby Barnett ’72 and Michael Tracy ’73 were both interviewed for the documentary, but what neither they nor Ruoff could have anticipated was the June 2010 death of Jonathan Wolken ’71, one of Barnett and Tracy’s fellow co-founders and co-artistic directors. Wolken died shortly before the premiere of Hapless Hooligan, and Ruoff included in the documentary archival interviews with him from 2009. “Jonathan’s death was a huge shock to everyone involved, and had repercussions on the company and echoes throughout the film,” Ruoff says. “I’d had a conversation with him on the phone shortly before he passed away, and he was excited about the film and about getting back into the studio.” 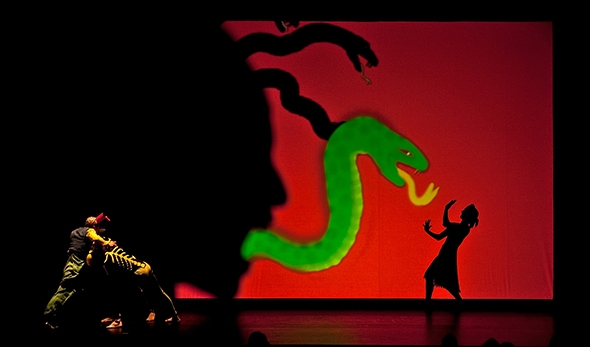 Pilobolus performs Hapless Hooligan in “Still Moving” at Dartmouth in 2010. “The return to Hanover by the company, 40 years after its founding, formed the basis for my film,” says Jeffrey Ruoff. (photo by Joseph Mehling ’69)

Ruoff became interested in making a documentary about the Washington, Conn.-based company after its founding members donated the troupe’s archives to Dartmouth’s Rauner Special Collections Library in 2005. Assisting him at different stages of the production were undergraduates Alexi Pappas ’12, Milo Johnson ’13, and Annie Munger ’13, whose work was supported by the James O. Freedman Presidential Scholar program (Pappas also received a grant from the Class of 1959.)

Students in Ruoff’s winter term 2012 advanced video-making course also benefited from his filmmaking experiences as they watched rushes, rough cuts, and a fine cut of the documentary.

“We talked about the shooting process and lighting, but we also talked about things like music rights, because maybe 15 seconds of music was crucial to the film, but cost 1,000 bucks,” Ruoff says. “I tried to share all the stages of the process, and I know it was beneficial for the students to see that there is a searching process that every filmmaker undergoes.”

It’s been a busy year for Ruoff, who has taught at Dartmouth since 2001. An anthology he edited, Coming Soon to a Festival Near You: Programming Film Festivals, was released in June, and he worked with Bill Pence, the director of film at the Hop, to organize Dartmouth’s year-long celebration of international film festivals, “Best in Show.” During summer term 2012, Ruoff led the Department of Film and Media Studies’ first foreign study program (FSP) to Edinburgh, Scotland. The FSP was planned to coincide with the 66th Edinburgh International Film Festival, which all of the students attended.

“It was great to share that immersive experience with them,” Ruoff says. “There were students who went to 33 films in 10 days. Some of them got to meet director William Friedkin; they saw the European premiere of Killer Joe and Brave, and had a lot of interactions with critics and directors. And I think just being inside the swirling festival atmosphere was very exciting for them.”

Ruoff is currently making his own rounds of film festivals with Still Moving: Pilobolus at Forty. The film is being screened at the Hot Springs Documentary Film Festival in Arkansas in late October and at the DOC NYC Film Festival in November.

“I’m very happy with it,” he says of the film. “It’s fun to be at this new stage of the project, of getting to share it with other people, which is the purpose of making it in the first instance.”