Dartmouth Professor Michael Chaney believes one of the most important writers of early African-American texts might not have considered himself a writer at all—but rather, a potter. 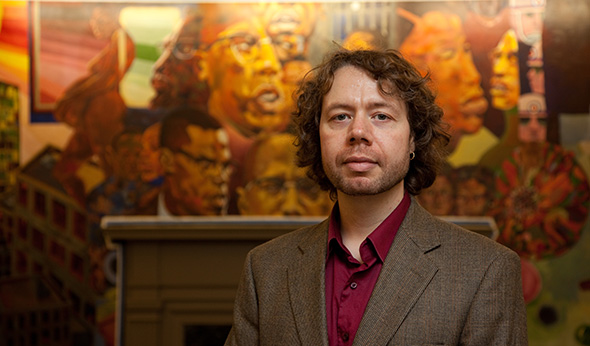 Professor Michael Chaney finds many paradoxes to the man known as “Dave the Potter.” “There is something so human about this story,” Chaney says. (photo by Joseph Mehling ’69)

Chaney is editing a book of essays that focus on the literature of David Drake—also known as Dave the Potter—an enslaved potter who inscribed poems into the storage jars and vases that he crafted. Chaney’s book project, “Poet, Potter, Slave, Myth: Collected Essays on David Drake,” will provide historic background as well as creative responses to Drake’s work. Chaney has solicited contributions from archaeologists, artists, historians, and others. In addition, Chaney is writing a chapter and an introduction. Rather than provide a biography of Drake, the book will interpret his work with regard to its place in American and African-American literature.

Working in Edgefield, S.C., Drake fashioned at least a hundred ceramic objects that date from the 1830s to the beginning of the Civil War.

Drake’s work serves as a contrast to traditional slave narratives, which often include themes of Christian rebirth and represent slavery as a type of hell. Chaney, an associate professor of English, says this time period produced few authentic literary voices among African-Americans, since abolitionists often influenced their writings.

“Slave narratives are mainly white-sponsored writings by ex-fugitive slaves, published by anti-slavery societies and abolitionist societies in the North,” says Chaney. “What stood as African-American literature in the 19th century was largely determined by the conventions of slave narratives.”

Drake’s alkaline-glazed stoneware continues to turn up, and some of his pieces have been valued at more than $100,000. Drake created sizable clay pieces, including at least one 40-gallon jar. His short poems often rhymed and were usually a few lines long. The poems varied in subject, sometimes describing the jar, “A very large jar which has four handles / pack it full of fresh meat—then light candles,” and other times reflecting a longing for family, “I wonder where is all my relations / Friendship to all—and every nation.”

Chaney notes that Drake was writing in South Carolina, one of  “the most treacherous states to be a slave,” in which slave literacy, if discovered, was severely punished. And yet he created massive pieces of pottery, working in one of the biggest kilns in the country, often carving his name in large letters across the vessels. While his writing could be seen as an act of defiance, his owner must have known about the poems, says Chaney.

“He obviously had the patronage and the approval of the master class,” Chaney says. “He could not have done what he did without their approval.”

Drake was a master crafter, according to Chaney, and therefore would have been a highly prized slave. Because of this status, Drake would have been in charge of a team of perhaps a dozen workers—half of whom were likely paid whites. This paradox is something Chaney explores both in his research and with his students.

Chaney teaches a course in winter term 2013, “Dave the Potter: Slavery Between Pots and Poems,” which combines creative and historic analysis to examine Drake’s work. In addition to historical readings about Drake, students learn to use a letterpress and craft their own pottery in Dartmouth’s ceramics studio.

Olivia Scott ’13, who took the class in fall term 2011, found the poems’ “simplistic beauty” to be striking and engaging. “Those one or two lines could lead us in discussion for an entire class,” she says.

Chaney says students benefit from the interdisciplinary nature of the course, gaining an appreciation for Drake’s work, as both a poet and a potter. He says students particularly enjoy creating their own pottery pieces.

“Students just love that,” says Chaney. “When they’re in the ceramics studio and they start making their own pots and jars, that is when I really see a creativeness flourish in my students.”

“We’ll never know what Dave was feeling or thinking when he made those vessels, but the ability to imitate his handiwork in a way that wasn’t purely theoretical or intellectual was priceless,” says Scott.

At the end of the course, students write a culminating paper on Drake, incorporating their work outside the classroom into their academic theories. Chaney says that his students have written high-quality essays, and he has considered including them in the book he is editing on Drake.

Chaney feels that Drake’s writing has been overlooked in the scholarly field, but he believes Drake eventually could hold an important place in the literature of that time.

“I really do think that Dave the Potter could move towards the center of a very unstable archive, or an unstable canon, that of early African-American texts,” says Chaney.

“There is something so human about this story, where we think we know some of these important subjects or key players in history or the past,” he says. “But it turns out there are always exceptions. It is within the exception that a wiser understanding of history emerges.”