On October 23, the Dartmouth College Wind Ensemble will perform the world premiere of Symphony for Band, a piece by Grammy-nominated composer Edward Green that was commissioned by a consortium of 13 of America’s leading university and conservatory bands that includes Dartmouth, the Eastman School of Music, the Manhattan Wind Ensemble, Yale University, and Columbia University. The concert will begin at 7 p.m. in Spaulding Auditorium. 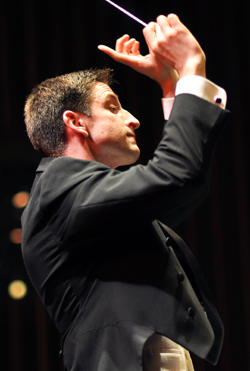 Dartmouth College Wind Ensemble Director Matthew Marsit will conduct the ensemble, performing a symphony commissioned by a consortium of 13 of America’s leading university and conservatory bands. Andy Pease ’01, Columbia University’s Wind Ensemble director and a former member of the Dartmouth Wind Symphony, spearheaded the consortium. (photo courtesy of the Hopkins Center for the Arts)

“Performing the premiere of a commissioned piece has the potential to draw a lot of people to Dartmouth and the Hopkins Center for the Arts because they won’t have the chance to hear this music anywhere else,” says Wind Ensemble Director Matthew Marsit of the piece by Green, who was nominated for a 2010 Grammy Award in the category “Best Classical Contemporary Composition.”

“It’s important to me that the greater music world be aware that incredible music is happening and being made at Dartmouth College,” Marsit says.

Green’s Symphony for Band is just one component of the Wind Ensemble’s Foundations for Wind Ensemble concert. They will also perform Strauss’s Serenade for 13 Winds, Op. 7, a longtime favorite of Marsit, and a variety of music intended to showcase the evolution of wind ensembles from the 18th century to the present.

The concert will be the ensemble’s first under its new name. Marsit changed the group’s name from Dartmouth Wind Symphony to Dartmouth College Wind Ensemble to better reflect the group’s composition and the musical repertoire that it performs. Whereas wind symphonies are typically much larger ensembles, with up to 100 musicians, wind ensembles generally consist of 45 to 50 musicians, much more in line with what has always been the case at Dartmouth. This smaller number increases the level of exposure and challenge for each musician, since there is seldom any doubling of individual instrumental parts. 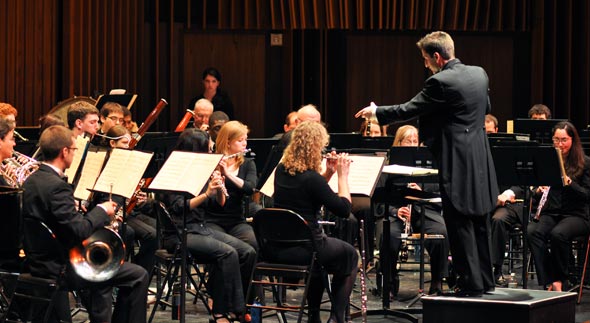 This week will be the ensemble’s first performance under its new name, the Dartmouth College Wind Ensemble. (photo courtesy of the Hopkins Center for the Arts)

“My primary goal, consistently, has been to give the audience a clearer understanding and appreciation for what the wind ensemble can offer as a performance medium,” says Marsit, who earlier this year completed a graduate degree in orchestral conducting with Bruce Hangen at The Boston Conservatory. “My work with symphony orchestras has only further increased my personal appreciation for the specific blend of color and sound that the wind ensemble can offer."

Students in the wind ensemble take part in two-hour rehearsals twice weekly, and are also expected to practice their instruments independently to optimize the benefits of group rehearsals.

“My appreciation of music has grown tremendously. Mr. Marsit is an incredible director, and he really wants us to enjoy what we play rather than just playing it mechanically,” says Suman Mathur ’15, a clarinetist from Castle Rock, Colo. “Although I’ve been playing the clarinet for a while, I’ve always just sort of played whatever was put in front of me. Now, I try to understand the context of the music and how all our skills are being enhanced by that specific piece.”

Marsit came to Dartmouth in the fall of 2009 from Cornell University, where he was assistant director of wind ensembles. As a conductor and clarinetist, he has performed with and led groups all over the country. In addition to directing the wind ensemble, he is director of the Dartmouth College Marching Band.

“The Dartmouth College Marching Band is a very fun group of young people,” Marsit says. “They understand that they serve many roles. To Dartmouth athletics, they bring energy and enthusiasm to football, basketball and hockey games. But they also represent the Hopkins Center and because of this, they are held to a high musical performance standard. No other ensemble, or really any group in the College is as publicly exposed as the marching band. We have the chance to be seen and heard by thousands of people on any given performance day.”

For Marsit, what distinguishes Dartmouth and the Hopkins Center is their commitment to artistic freedom and growth.

“There is almost no project I can dream up that the Hopkins Center will not try to make happen, so long as it is focused on offering a life-changing experience for our students,” he says. “The things our students are able to experience here, they will remember and talk about for the rest of their lives.”