When Gabriel Dorfsman-Hopkins ’13 headed for a summer research program at the University of California, Berkeley, he didn’t know he would return home a prize winner. 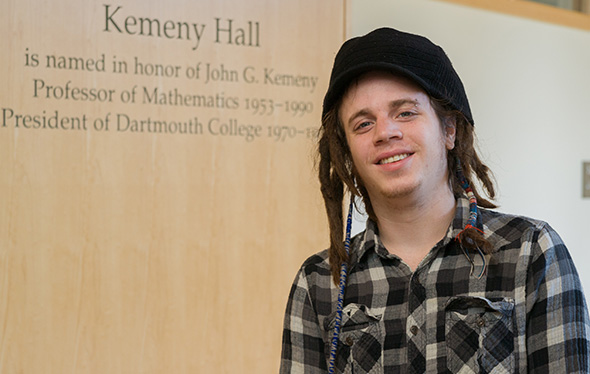 The son of two University of New Hampshire professors, Dorfsman-Hopkins enrolled in Dartmouth’s Comparative Literature Program. He became a fellow in the Mellon Mays Undergraduate Fellowship Program but he soon cultivated a love for theoretical mathematics and proceeded in that direction. Last summer, he attended the Mathematical Sciences Research Institute Undergraduate Program at Berkeley, a program for talented math students, targeting underrepresented groups. “We worked on an interesting problem and were actually able to prove a couple of theorems over the course of the summer,” says Dorfsman-Hopkins. “It was my first time for proving anything new, and it was really exciting.”

His excitement translated into an abstract accepted for the annual meeting of SACNAS—the Society for Advancement of Chicanos and Native Americans in Science—in Seattle. Dorfsman-Hopkins, a Mexican-American, is a SACNAS member. The organization is supported by sponsors that include the National Science Foundation, the American Mathematical Society (AMS), and the National Institutes of Health.

Presenting his research at the meeting was only the beginning. “It was a great networking opportunity and I met people from all sorts of graduate schools I was interested in,” says Dorfsman-Hopkins, adding that he “had some really cool conversations with them.”

Then came “Who Wants to Be a Mathematician,” a contest supported by the AMS. “The competition was like a TV game show, live in front of everybody. What was cool was that four of the six people who qualified were from my summer program at Berkeley,” he says.

Not only did Dorfsman-Hopkins walk away with the prize—$500 and “an awesome calculator”—but he also took on a bonus question, pocketing an additional $2,000 for his answer.

Now back at Dartmouth, this prize-winning wizard is contemplating graduate schools. “Since I really haven’t narrowed down the kind of math that I want to do, I am looking at schools with larger departments with a variety of different strengths.”

His sights are set on Berkeley, Massachusetts Institute of Technology, and the University of Illinois at Urbana-Champaign.

“At this point, a career in academia is probably the trajectory I am on, but I have not really committed fully to making that my life,” says Dorfsman-Hopkins. However, his commitment to the field of mathematics is undeniable.