The E.E. Just Symposium was a special kind of conference. Over three days—September 27-29, 2012—eminent physicists, astronomers, and others discussed the state of their scholarly and experimental work. Scientists and students in standing-room-only sessions shared the enthusiasm of the speakers as they heard about scientific theory, historical developments, and what the future may hold. 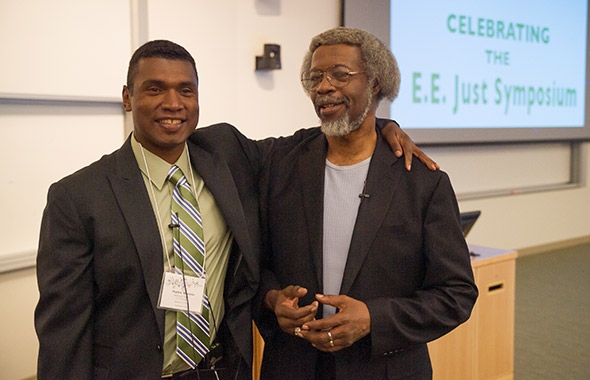 The presenters paid homage to E.E. Just and the inspiration he provided for many of them personally, as well as the role model he has become for many young scholars. Ernest Everett Just, the symposium’s namesake, was a Dartmouth Class of 1907 alumnus, a pioneering cellular biologist, and one of the institution’s earliest African American graduates.

Congratulations were offered to symposium organizer Stephon Alexander on being named the new E.E. Just 1907 Professor and director of Dartmouth’s E.E. Just Program, which aims to increase the number of minority students majoring in the sciences. 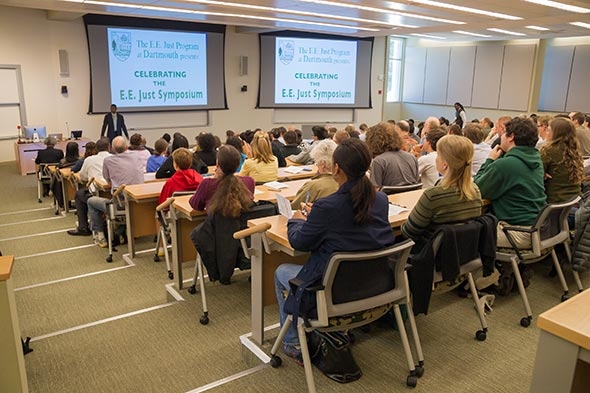 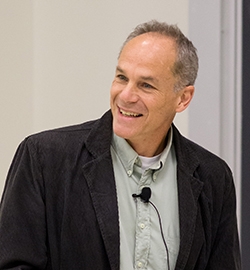 The E.E. Just Symposium closing presentation was delivered by Dartmouth’s Marcelo Gleiser, the Appleton Professor of Natural Philosophy and Professor of Physics and Astronomy. Gleiser focused on subjects of magnitude, such as the origin of life and the history of the universe. He took his audience through a series of mind-bending questions, such as why the universe is expanding and what is it expanding into. He also asked if earth is the only place where life has arisen in the universe and touched on the nature of dark matter.

The allure of such “big questions” has resulted in Gleiser and Dartmouth colleague Robert Caldwell  securing a prestigious grant from the John Templeton Foundation for $250,000 over two years, one of only 15 such grants awarded in an international competition.

The stated purpose of the grant, awarded through Templeton’s New Frontiers in Astronomy and Cosmology program, is “to advance fundamental scientific understanding in areas of astronomy and cosmology that engage ‘Big Questions’ by supporting imaginative scientific research.”

“It’s about exploring the roots of complexity in the universe, that is, how things went from simple in the Big Bang to complicated now, with stars, galaxies and people,” says Gleiser, reprising his E.E. Just lecture.

The New Frontiers in Astronomy and Cosmology program marks the centenary of the birth of Sir John Templeton, who regarded cosmology and astronomy as exemplary scientific pursuits that have continually expanded humanity’s vision of the world.

String theorist Jim Gates (Sylvester James Gates Jr.), PBS television personality and Obama science and technology adviser, opened the conference. He spoke of the wizards of Geneva, his “Lords of the Ring” who used the Large Hadron Collider to bring us the Higgs boson on the Fourth of July; and of Capt. James Tiberius Kirk and his matter-antimatter engines on the Starship Enterprise. And he told his rapt audience of the nature of mathematics, “the incomparable human language that organizes human thought. The power of mathematics enables us to see things we didn’t even know were there.” Syracuse University Dean George Langford, who previously held the E.E. Just 1907 Professorship at Dartmouth, described Just as “one of the best and the brightest, a hero who was part of the Harlem renaissance of the 1920s and ’30s.

”E.E. Just had to prove that blacks could make contributions to science and the arts,“ said Langford. He went on to note that problems continue for underrepresented minorities in science and called for rallying students around national initiatives in pedagogy, ”getting kids involved early, experiencing the excitement of the research experience.“

The variety of talks over the following days included McGill University’s Robert Brandenberger holding forth on cosmology and superstring theory as a way to describe the nature of space, time, and matter. He brought the audience to laughter with his comment on what string theorists do. ”We construct boring plots from beautiful pictures,“ he said.

Lee Smolin of Ontario’s Perimeter Institute for Theoretical Physics carried the crowd into metaphysics and philosophy. He spoke of the nature of quantum gravity and time, and addressed questions like ”why are there laws of nature?

“Time is real,” Smolin said. “Our ability to invent the future is limited only by our imagination and willingness to take responsibility.”

The future was also dwelt upon by Duane Valz of Google, Inc. “The future is already here,” said Valz, alluding to futurist William Gibson. “It’s just not evenly distributed.” The stuff of science fiction—robots, cyborgs—is in our everyday lives. He pointed to drone aircraft as robots, in operation but limited to sectors where robotic principles are being applied. As to cyborgs, he noted the biomechanical hybrid aspects of Stephen Hawking and Olympic runner Oscar Pistorius as presaging things to come. Princeton astronomerDavid Spergel is a theoretical physicist and he led attendees down that cosmological path. Spergel spoke of light-speed, time, the Big Bang, and the ever-increasing expansion of the universe. In his wide-ranging and entertaining discourse he moved from dark matter to black holes to supersymmetry to the age of the universe and much more.

The phrase, “much more,” characterizes the scope and breadth of the inaugural E.E. Just Symposium. The symposium offered additional presentations on anthropology, cancer surgery, neurobiology, mathematics, and, of course, much more.