Faculty members share their insights on current events with Dartmouth Now in a question-and-answer series called Faculty Forum. This week, Randall Balmer talks about the role of religion in the presidential race.

A prize-winning historian and Emmy Award nominee, Professor Randall Balmer chairs the Department of Religion. He taught at Columbia University for 27 years and was a visiting professor at Dartmouth before joining the faculty full-time on July 1, 2012. Balmer has published widely in both scholarly journals and the popular press, and has written more than a dozen books. 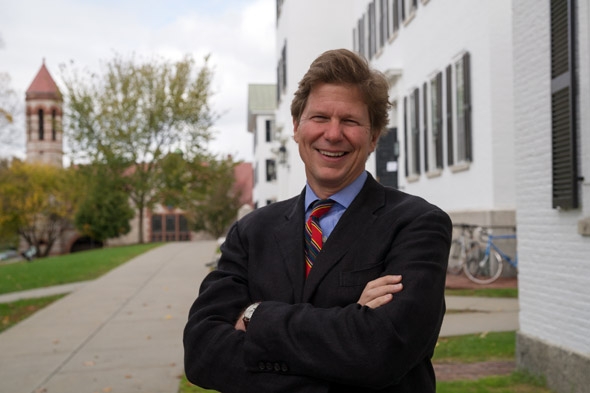 Randall Balmer, chair of the Department of Religion, comments regularly on religion in American life, and is a frequent guest on network television and NPR. (photo by Eli Burakian ’00)

He is currently working on a biography of former President Jimmy Carter, whom he describes as the first evangelical president. His second book, Mine Eyes Have Seen the Glory: A Journey into the Evangelical Subculture in America, was made into an award-winning, three-part documentary for PBS. Balmer wrote and hosted that series as well as a two-part series on creationism and a documentary on Billy Graham. He comments regularly on religion in American life, and is a frequent guest on network television, NPR, and cable television’s Colbert Report and the Daily Show With Jon Stewart.

What is significant about this presidential race from a religious perspective?

What is significant is that one major party for the first time in American history has no Protestant on its ticket. There is only one Protestant out of the four candidates on the two major party tickets and that’s President Obama. On the one level what you see is this is a logical outgrowth of American pluralism, which has defined our place in the world since the 17th century.

On the other hand it is significant that you have a Mormon at the top of the ticket for the first time in American history for a major party and his running mate is a Roman Catholic. … For the Republican Party this represents a major development in that its core constituency over the past 30-plus years has been the religious right, principally politically conservative evangelicals. And for this group, their payoff has been minimal for their political activism. … In effect, they cast their lot with the Republican Party in the 1980s and have remained there ever since. And my rhetorical question is, what do they have show for it? They have no Supreme Court appointees, they have no major appointments, no major cabinet posts or even ambassadorships.

Do you have a sense that the religious right is losing patience with the Republicans?

I’m getting it a little bit. I was in Des Moines recently to give a lecture, and I was in one of the strongholds of the religious right, and I was trying to sound out people. There is disappointment there, and I think it’s crystalized this time around with the nomination of Mitt Romney, about whom they remain deeply suspicious. What I was picking up in Des Moines is that yes, many of them will probably vote for the Republican ticket, but they won’t go out and work for the presidential candidate in ways they would have in the past.

And again it comes back to what’s the payback. My deeper objection to this is that I think evangelicals who have become involved in the political process on behalf of the Republican Party have compromised their own religious principles to do so. Jesus called on his followers to care for the “least of these” and I don’t see that sentiment resonating through the Republican Party platform.

Why do you think questions about President Obama’s faith continue to come up?

I think it’s ideologically driven and I would even be prepared to say that there’s racist sentiment behind it. They have to find some way to discredit him. It is no longer acceptable, at least in polite company, to express racist sentiments, so this is kind of a back-door way to get at him. But to be honest, I think Obama has been remarkably fluent in the language of faith, and theology and religion. The Nobel Prize acceptance speech he gave in Oslo was remarkably sophisticated theologically. … And if you look at his remarks at the various prayer breakfasts, this is a person whose faith has indeed shaped him.

How has Romney addressed questions about his faith?

Romney has successfully and consistently stonewalled those questions. … He clearly does not want to talk about his faith, and frankly, I think it’s hurting him. I think if he had said early on, “Yes, I’m a Mormon, this is who I am, this is how I understand my place in the world, my responsibility to others, my family’s been Mormon for generations, I’m not going to apologize for my faith, I’m not going to back away from my faith.” If he had done that I think the American people would be much more understanding and sympathetic. The problem with his handling of his Mormonism is he gives the impression of being a moving target, of dodging and weaving, and that merely reinforces the image that many people have about him already because he’s changed his position on so many different issues over the years.