Forty Years of Fortitude: The Black Alumni of Dartmouth Association 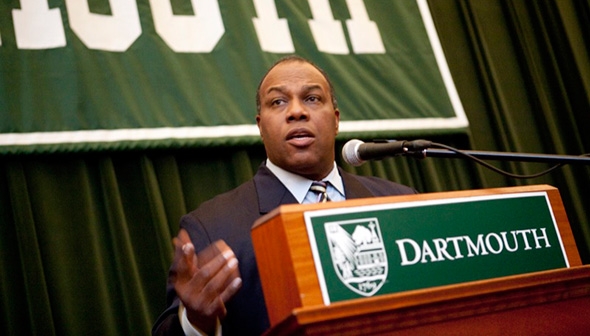 Ellis Rowe ’74 has been involved with the Black Alumni of Dartmouth Association (BADA) since its earliest years and has served as president of BADA since 2010. (photo by Tom McNeil)

Alumni responded. That fall about fifteen of them met at the Dartmouth Club of New York in the Commodore Hotel to listen to the students’ concerns. Word spread to alumni through regional meetings in Boston and Washington, D.C. Then in May of 1972, with the support of president John Kemeny, about 50 alumni and their families gathered for a Conference of Black Alumni on campus. One result was the formation of the Black Alumni of Dartmouth Association, or BADA.

Now at 3,187 members, BADA continues to support students through a range of online and person-to-person networking opportunities. Former BADA president Tracey Salmon-Smith ’87 says, “BADA is most important to me because of the friendships I have developed over the years. Throughout law school and my career as an attorney, I have had the invaluable support of fellow BADA members along the way.”

Founded in 1972, BADA celebrates its 40th reunion October 26–28, 2012. In the weeks leading up to their reunion, the Office of Alumni Relations asked some BADA members why their organization is important to them. Here’s what they had to say.