Freeman Hrabowski, One of ‘TIME’s’ 2012 Most Influential People, Speaks October 23

Freeman Hrabowski III, president of the University of Maryland, Baltimore County (UMBC), will speak October 23 at Dartmouth as part of the “Leading Voices in Higher Education” lecture series. The talk, free and open to the public, will begin at 4 p.m. in Filene Auditorium at Moore Hall. 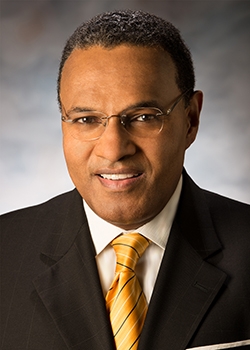 Freeman Hrabowski will speak about expanding diversity in the fields of science and technology. (photo courtesy of UMBC website)

“I’ll be speaking at Dartmouth about the findings of a recent National Academies committee I chaired on underrepresentation in science and technology,” says Hrabowski. “We have found that integrating institutional culture changes with our planning processes leads to many more students from all backgrounds excelling in these fields.”

Hrabowski has served as president of UMBC since 1992, helping usher the university into national prominence. In 2009, TIME named him one of “The 10 Best College Presidents,” and in 2012 the magazine listed him among “The 100 Most Influential People in the World.” Hrabowski, whose research focuses on science and math education, was recently appointed as the chair of the newly formed President’s Advisory Commission on Educational Excellence for African Americans.

UMBC opened its doors to students in the fall of 1966 and currently serves about 13,000 students. This year it tied for first in U.S. News and World Report rankings of “Up-and-Coming Schools.”

The next “Leading Voices in Higher Education” speaker will be Ray Kurzweil on November 8.