Internationally known projection artist Ross Ashton will present a new work, Five Windows, in its world premiere at 9 p.m., on Friday, October 12. Five Windows was commissioned by Dartmouth, and will be displayed on the northern façade of the Hopkins Center for the Arts. 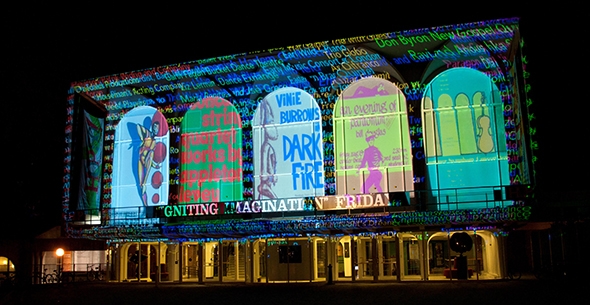 As Ross Ashton rehearses his Five Windows, one of his images appears on the facade of the Hop. (photo courtesy of Ross Ashton)

This debut is part of an ongoing celebration of the arts at Dartmouth during the 2012-13 academic year, and in conjunction with this weekend’s programming for the 50th anniversary of the Hop. The work will illustrate the Hop’s continued role as an epicenter of interdisciplinary creativity during the past five decades, including its trailblazing history as one of the first collegiate arts centers in the United States. Five Windows serves as the latest example of Dartmouth’s historic and continuing commitment to public art installations by some of the world’s leading contemporary artists.

“Five Windows is a celebration of the Hop and how it came to be, the times it came from and the people involved, and the fact that it’s a space for creativity,” says Ashton.

Ashton draws on the understanding of the relationship between artwork and structure, light and surface, object and subject, and his large-scale projections have graced major commemorative events throughout the world, including his recent video artwork Face Britain for the Queen’s Diamond Jubilee in London in 2012.

“The world premiere of Five Windows is part of a remarkable roster of public art that is being presented on campus this year, and it reflects our broader mission to engage the Dartmouth students and faculty, as well as the wider community, in a dialogue through which we strive to make the arts accessible to all,” says Michael Taylor, director of the Hood Museum of Art and chair of the public art committee at Dartmouth.

“By enriching our campus with works by cutting-edge artists like Ross Ashton, Dartmouth reaffirms its interest in placing the arts at the center of the college or university experience, making it a national model for the creative campus of the 21st century,” says Taylor.

Five Windows will animate each of the five windows of the Hop’s façade, an iconic exterior designed by architect Wallace Harrison as a model for his later work on Lincoln Center in New York City. The projection draws upon both archival and recent images and videos of the Hop, including blueprints and schematic drawings from the planning of the building; photos of the construction and inauguration, including then Dartmouth President John Sloan Dickey atop a front-loader taking a ceremonial first scoop of earth at the site; posters from throughout the Hop’s five decades; and footage from student performances.

Ashton’s work will be accompanied by a new score composed by Howie Saunders, owner of DoubleDose Music in London, whose portfolio includes creating music for the movie The Matrix. Interwoven with Saunders’ score are audio recordings from a Hop inauguration speech in 1962 by Robert Frost—one of the poet’s last public addresses—and the Dartmouth Glee Club singing work commissioned for the occasion.

Following the world premiere on Friday, the projection and score for Five Windows will be shown for four more nights.

“We are thrilled to collaborate with Ross Ashton on Five Windows, which captures the spirit of artistic excellence and creative experimentation that has defined Dartmouth’s Hopkins Center for the Arts for the past 50 years,” says Hopkins Center Director Jeff James. “This incredible new work celebrates the Hop’s history as a beacon of the nation’s collegiate arts community, and we look forward to another 50 years and beyond, where the community can continue to take advantage of the Hop’s many academic and public programs.”

The presentation of Five Windows follows the recent installations of Louise Bourgeois’ Crouching Spider—an immense bronze and stainless steel sculpture on loan for the year from the artist’s estate—and Dartmouth Panels, a commissioned work by Ellsworth Kelly that consists of five aluminum panels, each painted in a single block of radiant color, that grace the eastern façade of the Hop.

This winter, Dartmouth plans to install the Ice Chimes, a weather-responsive sculpture that unites science, art, architecture, and music, by Dartmouth alumnus Keith Moskow ’83 and Robert Linn of Moskow Linn Architects. The sculpture amplifies both the beauty and the sound of icicles over the course of their existence, as they sway in the wind, clinking and chiming until they grow heavy with their own weight and fall into the collection bucket below. A musical sculpture that reinterprets a natural process, the Ice Chimes will be on display on campus during the winter months of 2012-13.

Dartmouth’s robust slate of public art installations during the 2012-13 year continues an 80-year tradition of engaging contemporary artists in the life of the campus and community. Dartmouth’s legacy of public art programming dates back to 1932, when the school commissioned noted Mexican artist José Clemente Orozco to create a mural in Baker Library. The resulting 3,200-square-foot work, The Epic of American Civilization, which features a new lighting treatment, is widely recognized today as one of the most historically significant murals of the 20th century. Since the 1930s, Dartmouth has welcomed more than 150 artists-in-residence to its campus, including such internationally recognized figures as Walker Evans, Donald Judd, R.B. Kitaj, Magdalene Odundo, Robert Rauschenberg, George Rickey, Alison Saar, and Frank Stella. 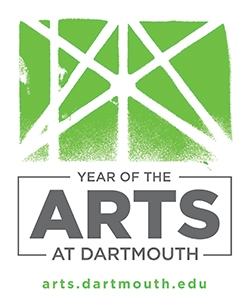