Listen to the podcast interview with Montgomery Fellow Howard Morphy.

Anthropologist Howard Morphy will talk about his research in a public lecture, “The Djan’kawu Sisters at Yalangbara: Material Expressions of Ancestral Agency” on October 19 at 5:30 p.m. in the Hood Museum of Art Auditorium (formerly the Loew Theater). 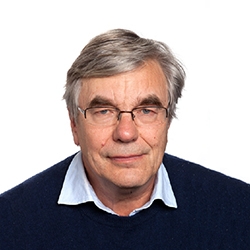 Howard Morphy is teaching a course in the Department of Anthropology during his fall term residency as a Montgomery Fellow. (photo courtesy of Howard Morphy)

Morphy, a professor of anthropology and the director of the Research School of Humanities and the Arts at the Australian National University, has been in residence as a Montgomery Fellow since September 1. He is teaching a fall term class, Anthropology 50.1: “Form, Context and Meaning in Aboriginal Art,” and will be at Dartmouth through December 20. In this podcast, he talks to Michael Taylor, director of the Hood, about “Crossing Cultures: The Owen and Wagner Collection of Contemporary Aboriginal Australian Art.”

Morphy has published widely on the anthropology of art, aesthetics, performance, museum anthropology, Aboriginal social organization, the history of anthropology, visual anthropology, and religion. He is co-editor of The Anthropology of Art: A Reader (2006) and Rethinking Visual Anthropology (1997), and produced a pioneering multimedia biography, The Art of Narritjin Maymuru, with Pip Deveson and Katie Hayne (2005). Morphy has conducted extensive fieldwork with the Yolngu people of Northern Australia and has collaborated on several films with Ian Dunlop of Film Australia. He has also curated many exhibitions, including “Yingapungapu” at the National Museum of Australia.

Prior to returning to the Australian National University in 1997, Morphy held the chair in anthropology at University College London. Before that, he spent 10 years as a curator at the Pitt Rivers Museum in Oxford. He is president elect of the Council for Museum Anthropology of the American Anthropological Association.